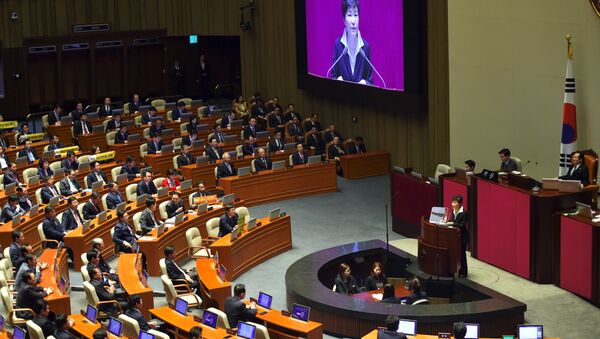 MOSCOW (Sputnik) — In 2015, the Samsung Group merged its two major affiliates despite foreign investors'opposition, while the NPS, the largest stakeholder of Samsung C&T with a 11.6-percent stake in the company backed the deal despite the risks. The investigation later revealed provision of illicit financial favors to the daughter of President Park Geun-hye's associate Choi Soon-sil by Samsung that was followed by raids in the company's headquarters earlier in November.

South Korea Prosecutors Implicate President Park in Friend’s Corruption Case
The decision to question ex-chairman of the board of the NPS, Choi Kwang, and former head of the fund operation division, Hong Wan-sun, will be officially adopted on Tuesday, the Yonhap news agency reported. The investigation into the companies' key figures sparked amid the political and corruption scandal involving South Korean President Park Geun-hye and her aide Choi.

On October 24, media reported that Choi allegedly received drafts of speeches and presidential documents, which could contain confidential information, though she had never held a public post. The revelation caused a massive anti-government protest in the country, with people calling on the president to step down.

Park is also suspected of involvement in raising funds for two nonprofit foundations dedicated to promotion of South Korean culture and sports, while president’s associate Choi is suspected of money misappropriation from these foundations.