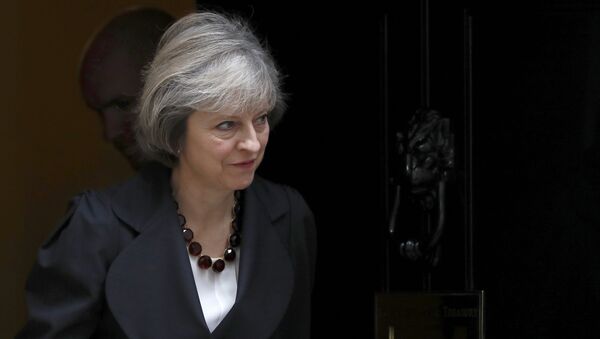 UK Prime Minister Theresa May on Monday called on the international community to keep exerting pressure on Russia over its campaign in Syria.

UK Must 'Learn From Libyan Mistakes' and Work With Russia in Syria – UKIP Leader
LONDON (Sputnik) — May said it was important to recognize Russia’s assertiveness and that London wanted sanctions against Moscow to remain in place. She also urged the international community to tell Moscow that bombing civilians in Syria was not acceptable.

Syria has been in a state of civil war since 2011, as government forces fight opposition groups and extremists operating in the country. Russia started its counter-terrorism operation in Syria in September 2015, at the request by Syrian President Bashar Assad. In March, Russia began withdrawing the largest bulk of its military from Syria after accomplishing its objectives.

In October, US Secretary of State John Kerry and UK Foreign Secretary Boris Johnson warned Russia it could face new restrictions for allegedly bombing civilians in the northern Syrian city of Aleppo, which is divided between pro-government and rebel forces.

Moscow has said multiple times that it thoroughly checked data when picking targets for airstrikes in Syria. There has so far been no proof that the opposite is the case.