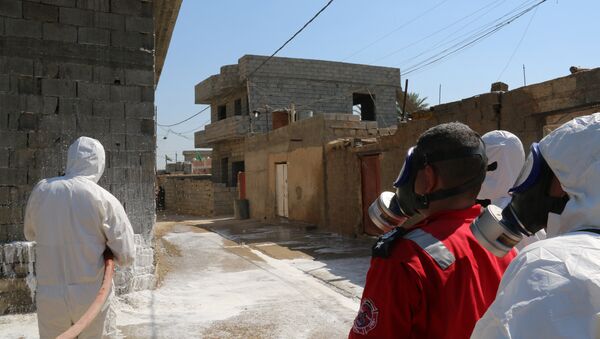 The Organization for the Prohibition of Chemical Weapons (OPCW) mission intends to continue checking all credible allegations of the use of chemical weapons in Syria and calls on member states to share relevant information, OPCW Director-General Ahmet Uzumcu said on Monday.

Turkish General Staff Says Daesh Used Chemical Weapon in Syria Against FSA
BRUSSELS (Sputnik) — He also urged states parties to provide "any relevant information with respect to past or future allegations of use of chemical weapons within the territory of the Syrian Arab Republic."

"The use of chemical weapons in Syria has been reconfirmed by the OPCW-UN joint investigative mechanism JIM. The Executive Council adopted at its last session a decision expressing grave concern with the findings of the 3rd and 4th reports of the JIM and condemning in the strongest terms the use of chemical weapons in Syria. The Security Council has extended the mandate of the JIM for another year," Uzumcu said at the 21st session of the Conference of the OPCW Member States.

Uzumcu stated that the declaration submitted by Syria may be inaccurate and not in accordance with the Chemical Weapons Convention and that it was necessary to obtain "original documentation regarding the Syrian chemical weapons program, access to officials with overarching knowledge about the program" and for Syria to "declare all relevant parts of the Syrian Centre for Scientific Research (SSRC)."

Russian Experts Find Evidence of Chemical Weapon Use in Aleppo – Russian MoD
He concluded that the OPCW intends to carry out inspections at research centers in Dzhamraye and al-Barzakh twice a year and, when security conditions permit, the sites identified in the JIM reports.

In August 2013, an unprecedented chemical weapons attack, which killed over 1,300 civilians, took place in Ghouta, a suburb of the Syrian capital of Damascus. Militants and Assad’s government blamed each other for the attack.

On October 27, the JIM expert panel released its latest report claiming that the Syrian government had used chemical weapons at least three times in the country throughout 2014-2015. An earlier report said the Islamic State (IS) terrorist group was also responsible for several attacks.