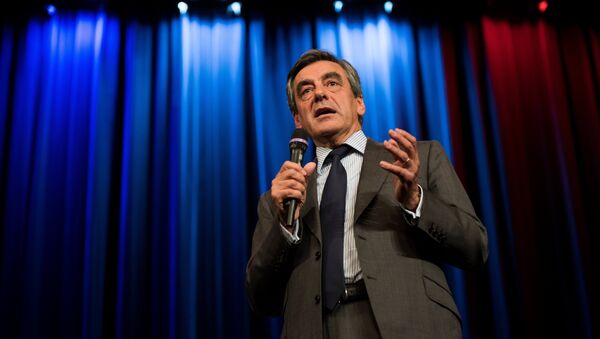 Francois Fillon owes his victory in center-right primaries to a more right-oriented stance on all issues than moderate Alain Juppe, a member of the Austrian parliament’s foreign policy committee, told Sputnik.

Ahead of Sunday’s primaries, Fillon slammed Juppe for his more centrist stance and accused him of not really wanting to change things. Fillon won The Republicans (LR) nomination by a landslide and is predicted to reach the runoff in the presidential election next May, where he will face far-right National Front (FN) leader Marine Le Pen in a tough race, Haider said.

The Austrian lawmaker noted that Fillon attracted additional supporters among right-wing electorate by advocating a better relationship with Russia. However he doubted Fillon's intentions, saying the former prime minister was unlikely to mend ties with Moscow as he promoted interests of the political establishment.

"I don't believe that Fillon will do that. He is after all a candidate of the EU establishment and thus will not be the one who fights for abandoning the sanctions against Russia. Only Marine Le Pen will do," Haider said.

During his campaign, Fillon reaffirmed on different occasions he intended to normalize ties with Moscow. Among over things, he also supported an idea of the national sovereignty, hardline approach to suspected Islamist radicals, stricter migration policy and advocated against gay marriage.