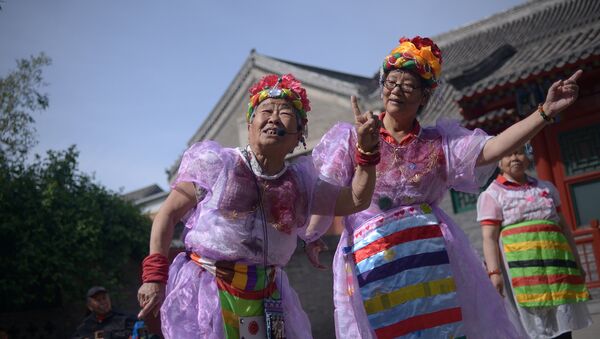 © AFP 2021 / WANG ZHAO
Subscribe
The continuous struggle against over population in China has borne its bitter fruit. Despite abolition of restrictions on family planning, today China faces reduction in the work force, reduction in young consumers and pressures on society due to continuous aging of its population.

Recently released data from the State Administration of Statistics of China has shocked Chinese policy makers and experts. It showed that the average numbers of births per woman in China in 2015 has been 1.05.

Even though, China lifted the ban on having a second child, unfavorable economic structures of the population growth remains in place, Russian journalist Mikhail Korostikov told Sputnik China.

As the statistics demonstrate, the indicator of birth, at 1.05, is exactly half the rate which is needed for maintaining the population in the country and according to the People's Daily newspaper right now this indicator is “the lowest in the world.”

'Golden Era': China's Global Triumphant March Prompts Panic in West
In fact, according to World Bank statistics, in comparison to China, in the United States the figure was 1.9, in France 2.0, in Vietnam 2.0 and in India it was 2.4.

After the release of the new data, Chinese officials sounded the alarm as they are looking for various ways to somehow improve the demographic indicators of the country.

He further said that in 2012 for the first time in its history, China experienced a workforce reduction by 3.45 million people.

By 2035, the Chinese workforce will be further reduced by 11%, while the number of pensioners, on the contrary, will grow to 14%.

As a measure to combat this looming crisis, on January 1, 2016, it was officially announced that the policy of “one family — one child” had been abolished and all Chinese people could now have two children. This, however, had practically no effect on the number of child births in the country.

According to Korostikov, there are other factors typical for more developed countries, which hinder people from having more children. Such factors include the desire of young people to improve their careers, the high cost of raising and educating children and the reluctance of young people to burden themselves with responsibility of having children.

According to the journalist the next step to solve this crisis could be the abolition of restrictions on births by single mothers.

This is How China is Transforming its Economy to Weather Global Economic Slump
Currently, in most provinces across China, a woman who cannot provide a certificate of marriage must pay a social tax, which is actually a fine and can reach up to $7-8,000. This amount is quite high as it exceeds the annual income of most Chinese in the country.

Even more complicated is the situation with acquiring in vitro fertilization in China. If the couple is not married, performing such a procedure is virtually impossible. Thus, couples are forced to go to Thailand or the United States.

China’s demographic problem threatens its economic plans because the reduction of the number of young active consumers of goods and services may jeopardize the country’s plans of going from an export-oriented economy to economy based on domestic demand.

In the course of the next few years, it is possible to expect abolition of all the remaining restrictions in the area of family planning because all such measures were introduced in an age of extreme poverty and excessive population pressure, which are not applicable to China nowadays; hence the restrictions are obsolete and require modifications.