NATO Forced to Disband Indian Ocean Flotilla 'Thanks to Russia' 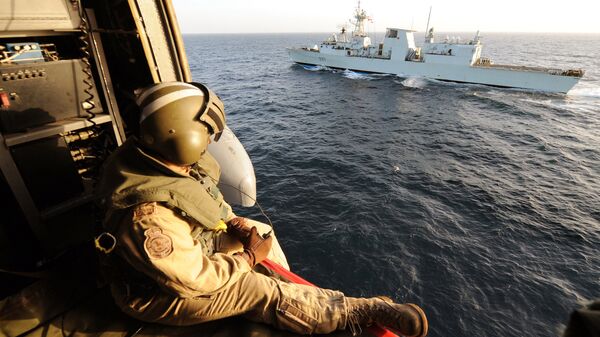 This week, NATO country ships and aircraft officially ended Operation Ocean Shield – a mission launched in 2008 to combat piracy off the coast of Somalia. Although officials have cited a drop-off in activity by Somali pirates, they've also admitted to a shift in the "global security environment," specifically the growing "threat" posed by Russia.

Reuters quoted NATO spokesman Dylan White as saying that NATO has had to adapt to changes in its assessment of global security threats, including by "increasing maritime patrols in the Baltic and Black Seas." The spokesman didn't mention Russia specifically, but these bodies of water are two areas where NATO has significantly increased its presence over the last two and a half years, to the ire of Moscow. Reuters wrote that the effective disbandment of NATO's Indian Ocean task force was in line with efforts to "shift resources to deter Russia."

The Trump Effect? Germany Urges Europe for New 'Peace Treaty' With Russia
White also noted that NATO is now "working to help counter human smuggling in the Mediterranean," ostensibly to help deal with waves of refugees coming from North Africa and the Middle East. This too helps explain the shifting of resources out of the Indian Ocean. NATO countries including the US, the UK and France had earlier been particularly active in these regions over the last decade and a half, including in their efforts to topple secular governments from Iraq to Libya and Syria.

The Royal Danish Air Forces carried out NATO's final Indian Ocean surveillance missions on November 21. The NATO mission, as well as those by Russia, China, and other nations, has helped to reduce pirate attacks dramatically since 2012, down from the over 30 major ships attacked and captured between 2010 and 2011.

NATO had fielded two multinational units –consisting of the so-called Standing NATO Maritime Groups (SNMG) 1 and 2, off the Somali coast, with ships and aircraft from the US, UK, Turkish, Spanish, Dutch, Italian, Greek, German, Portuguese, Norweigian, Canadian and Danish navies. Each SNMG typically consisted of between five and seven ships at a time.

Commenting on the redeployment, Alexei Fenenko, a senior researcher at the Moscow-based Institute of International Security Problems, noted that even though redeploying these groups wouldn't pose a serious threat to Russia, it does speak to the mindset of NATO's long-term anti-Russian strategy, announced in 2014 amid the crisis in relations between Moscow and Western nations over the situation in Ukraine.

Fenenko recalled that "after Crimea's reunification with Russia, US Vice President Joe Biden clearly talked in Bucharest about the need to resist growing Russian power in the Black Sea, and the creation of a counterbalance. One of these countermeasures, he said, would be to increase pressure on Russia in the Baltic Sea, where Russia's position is weaker. This, [according to Biden] was something that should be taken advantage of." 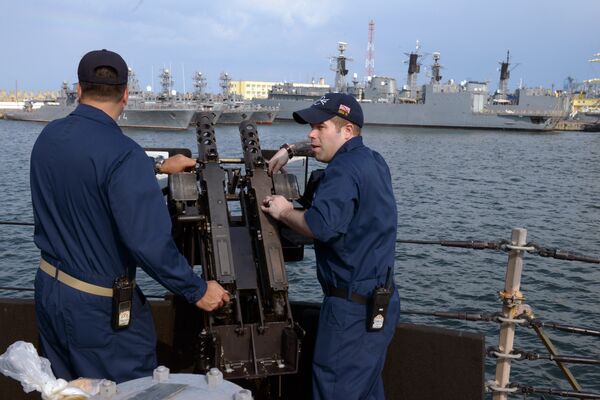 Later, "in Warsaw, US President Barack Obama said that Washington intends to deploy military infrastructure in Eastern Europe, pointing to three central US allies in the region – Romania, Poland and Estonia. He also urged NATO to expand its partnership with neutral countries, including Sweden and Finland. These decisions had been confirmed at the NATO Summit in Wales in September 2014. There too it was decided to strengthen the defense capabilities of Eastern European countries."

"If we take the Black Sea, there it would be unpleasant for us if the Americans signed an agreement with Bulgaria to lease the port of Burgas, something they have been negotiating for a long time; or if they do so with Georgia, leasing the port of Poti," the expert stressed. "If this happens, the US will automatically become a Black Sea Power, and thus destroy the existing regime in the Black Sea Straits under the Montreux Convention of 1936, under which passage for warships of non-Black Sea powers is granted only with Turkey's consent."

Bulgarian President-Elect Hopes to Rebuild Trust in Ties With Russia
Accordingly, Fenenko noted that given the danger of a permanent US presence in the Black Sea, which would be equivalent to Russia setting up shop in the Gulf of Mexico, Moscow "needs to negotiate with Turkey to preserve the existing Convention."

As for dangers posed in the Baltic Sea, the analyst noted that Russia's security may be compromised if Finland's neutrality is eroded with the signing of an agreement on naval cooperation with NATO. "Secondly, this could happen if NATO members attempt to block our sea links with Kaliningrad by including Sweden and Finland into the alliance. Third, they are pushing for the creation of a permanent naval base in the Baltic countries."

For his part, military expert and political analyst Ivan Konovalov explained that NATO's decision to fold up its Indian Ocean flotilla probably has more to do with trying to present Russia as a threat 'even more dangerous than the pirates' than anything else, similarly to how US and European officials have previously claimed that Russia is a danger on par with Ebola or even Daesh (ISIL/ISIS).

In reality, Konovalov noted, the end of the NATO mission has to do with the fact that the alliance is optimizing its resources. "The coast of the Gulf of Aden in Djibouti has Italian, American, French, Japanese and Pakistani military installations, the Chinese are building their own base, India is active, and so are various private military contractors, who protect the ships passing through the area." Effectively, the analyst suggested, there's simply no longer any point for NATO to "hang around and collect its ships" in the area, which has already become sufficiently secure. 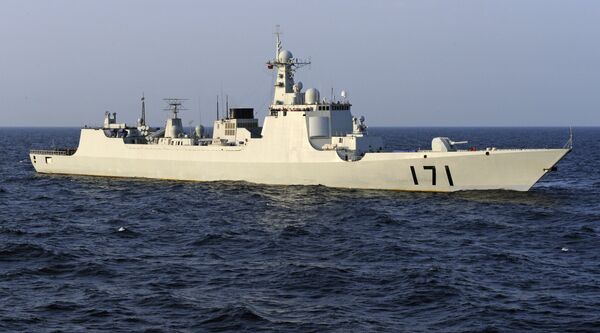 At the same time, while Somali piracy continues, the kinds of brazen operations (including the seizure of major international cargos) of years past have declined, with the pirates now focusing on yachts and fishing boats, rather than major international cargoes. "In general, the life of a pirate is not the same it was 8 years ago, when they operated with virtual impunity. They had their people in London, the Suez, etc. Pirates did not simply attack – they knew specifically why to take a particular ship, and whether they would be paid insurance…Now this business has collapsed, and therefore NATO no longer needs to be present via their SNMGs," Konovalov concluded.

Finally, Andrei Frolov, editor-in-chief of Arms Export magazine, said that he found it ironic that NATO was talking about the "threats posed by Moscow" while at the same time cooperating with Russia and China in the fight against Somali pirates all these years. "Apparently the decision to close down their operations was meant to remove any ambiguity," the analyst joked.

Russia Doing Everything Possible to Protect Borders Amid NATO Expansion
At the same time, Frolov admitted that there is an argument to be made about redeploying to the Mediterranean to deal with the problem of refugees. After all, he noted, "the Mediterranean Sea is a priority direction for European countries, in view of the situation in Libya, and refugee crisis and growing radicalism. The fight against the illegal trafficking of refugees has become a pressing issue for European NATO member countries." 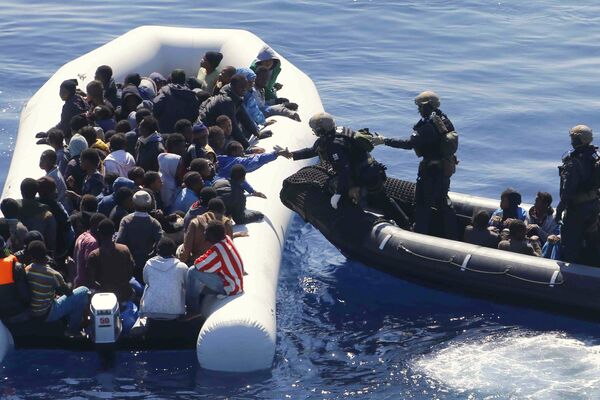 German Navy sailors surround a boat with more than 100 migrants near the German combat supply ship 'Frankfurt am Main' during EUNAVFOR Med, also known as Operation Sophia, in the Mediterranean Sea off the coast of Libya, Tuesday, March 29, 2016
© AP Photo / Matthias Schrader

"As far as 'containing an aggressive Russia' is concerned, that, in my opinion, is simply the usual PR based on anti-Russian attitudes, and does not carry any deep meaning. As far as strengthening their positions in the Black Sea, NATO officials can say anything they want, but in reality there are constraints on their presence there," Frolov concluded.