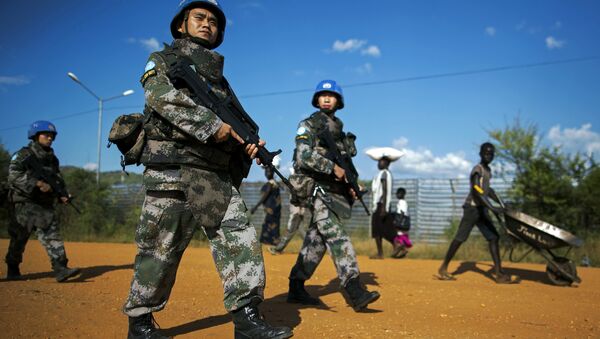 © AFP 2021 / ALBERT GONZALEZ FARRAN
Subscribe
In a reversal of its previous position, South Sudan has agreed to allow an increase of UN peacekeeping troops in the country "without conditions."

The UN Security Council voted in August to send an additional 4,000 troops to the country after an outburst of violence around the capital, Juba, killed hundreds. President Salva Kiir initially argued that more UN forces would threaten the sovereignty of the five-year-old nation and said his government would need to approve the size of the force, the weapons they would use and the nationality of the UN troops.

There are already 12,000 UN troops in the country as part of the UN Mission in South Sudan (UNMISS). The new troops are intended to help secure the capital city and its airport, as well as UN facilities there.

On November 25, after a long meeting chaired by Kiir, Deputy Information Minister Akol Paul Kordit said the "cabinet has resolved unanimously to allow the deployment of the regional protection force anytime from now," Deusche Welle reported.

"We have agreed without precondition because the resolution is clear and we want the country to move forward," Kordit said. "So our committee is going to finalize the deployment process."

It is not yet known when new troops will arrive and where in the capital they will be stationed.

"I expect them arrive at any time. The challenge is now on the UN to implement and fulfill their promises," Minister of Cabinet Affairs Martin Lomuro told the Associated Press November 26.

Speaking at a UN Security Council meeting November 17, US Ambassador to the UN Samantha Power called the country "a nation at the precipice," noting that the UN's Special Adviser for the Prevention of Genocide said there is "a strong risk of violence escalating along ethnic lines, with the potential for genocide" in the country.

"[W]e do not have adequate forces in place to stop mass atrocities, should the violence continue to escalate – as all those who watch South Sudan closely deem likely," she told the council.

Power also said the US would support an arms embargo on South Sudan and targeted sanctions against those they believe responsible for the violence.

Newly independent South Sudan was racked by a civil war starting in 2013, during which tens of thousands were killed. Now, factions of the opposing armies led by Kiir and rebel leader Riek Machar been stationed in Juba since April, after signing a peace agreement in August 2015. But the troops have yet to work together to jointly maintain peace in the capital, Deusche Welle comments.

UN troops already in the country have been criticized for failing to prevent attacks on civilians.