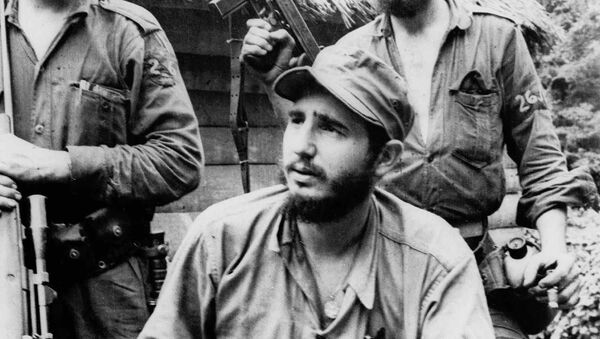 Castro, the Cuban revolutionary who survived hundreds of assassination attempts and nearly a dozen US presidents, passed away on Saturday, aged 90. A funeral ceremony has been scheduled for December 4, and will be held at a cemetery in Santiago de Cuba. Cuba has received a flood of condolences from leaders around the world, Russia included.

Volker Skierka, veteran German journalist and author of the book "Fidel Castro: A Biography" spoke to Radio Sputnik about the man and his era.

"He has been one of the most important political figures of the 20th century, and I think that he is going into history as a hero who was the only one to successfully oppose the influence of the great empire to the north," Skierka said, speaking of Castro's international significance.

Fidel's Legacy: 'Cubans Give Us Example of How to Develop and Live'
At home, Castro will be remembered for giving the Cuban people back their national independence and dignity, as well as for his "revolutionary social reforms" in healthcare and education. "This is a point that I think the Cuban people will try to keep for the future, because it's a sort of role model for Third and Second World countries," the journalist noted.

As for Castro as a man, Skierka suggested that the revolutionary's personality and charisma were "very important" in and of themselves in accounting for many of his successes. "He was very charismatic. I met him after I wrote this biography. We had an informal discussion, and I must say that he was so fascinating that I was really happy that I hadn't met him before, because it would have caused difficulties to write the book."

Castro was "really outspoken, and had a talent to get you concentrated only on him," the journalist recalled. "This was really an exceptional political talent. He was very intelligent, and was an excellent speaker. People listened to him for hours, and not because they had to, but because they wanted to."

World
Fidel Castro’s Death Heralds Period of Change for Cuba
Asked whether Castro's passing could signify any important political or economic changes on for the island nation, Skierka noted that if change does occur, it will be slowly. "[President] Raul Castro has implemented several changes; but it's going very slowly, and I think the best way is to do it slowly, because if reform [proceeded too quickly], I think this could implode into chaos."

At the same time, the journalist suggested that while continuing to develop relations with the United States may be important, Western countries shouldn't get their expectations up too high. "Because on the one hand, there is still the embargo, and on the other hand we will have to see what's going to happen with the new American president – how he will deal with the Cuban situation. Although I could imagine that [Trump] might continue the course of Obama, to the disappointment of many of his followers."

Ultimately, looking back to the limited Cuban-US business ties established in the 1990s, mostly with Republican governors and officials, Skierka noted Trump is actually quite likely to face "high pressure on continuing and developing economic ties with Cuba. And I think they will also do so because they don't want stand by, seeing as China, Russia, Brazil, Canada, and Europe pass them by and do business with Cuba."