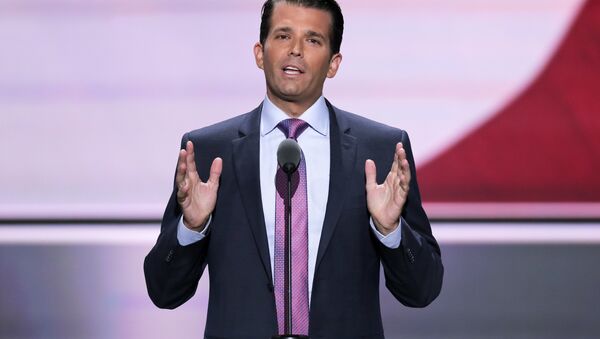 Randa Kassis, the chair of the Syrian opposition Movement of the Pluralistic Society, told Sputnik that she had discussed a new Syrian constitution during her October meeting with US President-elect Donald Trump’s son.

ICRC Hopeful of Resuming Cooperation Between US, Russia on Syria - President
MOSCOW (Sputnik) – On Wednesday, The Wall Street Journal reported that Donald Trump Jr. attended an October 11 event hosted by French think tank Center for Political and Foreign Affairs to discuss the issue of Syrian settlement. Kassis, the wife of the center's founder, Fabien Baussart, later said she and Trump discussed at the event how the United States and Russia could reach an agreement to end the war in Syria.

"The key issue for us is a constitution which outlines the president's powers. The president currently has all powers to be the ruler of Syria, the head of both the executive and legislative branches. We want to separate them, to take away a large part of the president's powers, whether it is Bashar Assad or someone else… This is what I touched upon during the discussion with Trump Jr., how we can achieve this and defeat religious and ideological radicalism. The problem we have in Syria is bigger than Bashar Assad," Kassis said.

She added that her difference with the Riyadh-formed High Negotiations Committee (HNC) opposition group is that the latter considers Assad's departure as a cornerstone in the settlement process, while the pluralistic society movement does not consider this a key issue.

Kassis stressed that the discussion mentioned how a new constitution should be "secular" and make all citizens equal regardless of their origins or religion, noting that Trump showed a better understanding of the situation than many in the current US administration.

Syria has been in a state of civil war since 2011, with government forces fighting the Syrian opposition groups striving to overthrow Assad. Damascus is also fighting numerous extremist groups, in particular the Daesh, a terrorist group outlawed in Russia and many other countries.

The opposition and Damascus, along with the mediators, have been engaged in UN-brokered settlement talks. The latest round of intra-Syrian talks took place in Geneva in April. The HNC walked out of the negotiations, citing the continuous fighting in Syria and the lack of progress on humanitarian issues. HNC transition plans included constitutional revision in its final stage.