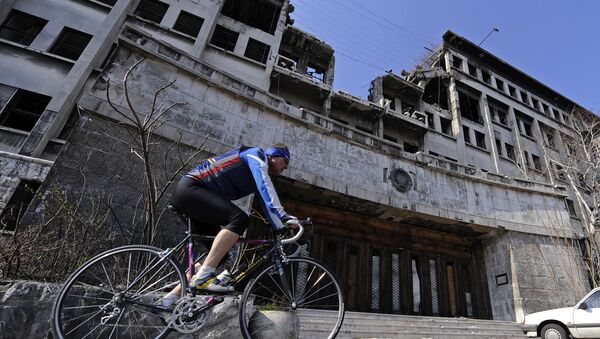 Commenting on Serbian-EU relations and on how they might change after the US president-elect moves into office, and also after the upcoming elections in France and Germany, Serbian right-wing politician Bosko Obradovic told Sputnik that his home county "would have been prosperous by now if it invested in Russia as much as it did in the EU."

"If during all those 16 years Serbia were investing in cooperation with Russia as much as it did into this disastrous accession into the European Union, it would have been prosperous by now," said Bosko Obradovic, founder and current president of a Serbian right-wing political party Dveri.

Serbia Will Not Join Anti-Russian Sanctions Despite EU Accession Talks - Envoy
"Brussels constantly tries to block our cooperation with Russia. It blackmails us, saying that we don't have the right to talk to Russia. If you want into the EU, you should stay away from Russia," the politician said.

He further cited as an example the recent trip of President Putin to Serbia when he offered Serbia access to the Russian market while the European producers are under sanctions.

"Almost on the very next day Brussels sent us a message: forget about it," he told Sputnik.

Bosko Obradovic also noted that there are many advocates of Western interests operating in Serbia who prevent the rapprochement between the two countries.

Commenting on the recent victory of Donald Trump and its possible impact on the Serbian-EU relationship, the politician said that it symbolized the end of the era of "Clintonism", which has been ruinous for the whole of the world civilization and during which the Serbs have been living through hard times.

"Clintonism is a disastrous linkage of transnational corporations, military-industrial complex and banks, who interfered into the affairs of other countries around the world, destroying entire countries and nations, robbing numerous economies," he elaborated.

The politician cited Kosovo and Metohija as the most blatant examples of the above.

On Pins and Needles: Trump's Victory Risks Becoming the 'End of Kosovo Project'
There the adepts of Clintonism, he said, such as Wesley Clark (retired General of the US Army, former chief of US European Command who started 1999 NATO bombing of Yugoslavia) and Madeleine Albright (then US Secretary of State, one of the leading proponents of NATO’s bombing of Serbia in 1999, so much so that many then referred to the operation as “Madeleine’s War”) have become exploiters of Serbia's natural resources on its own territory.

In other words, they have launched all their wars for the sake of their own business, the politician explained. Therefore he said that he hopes that the election of Trump will signal the final defeat for Clintonism.

The politician however stressed that Serbs are not out of Europe, they are Europeans and have no problems with European values. They have problems with the European Union, which has taken away their Kosovo, which had been bombing them, is blackmailing them and which keeps putting new conditions on their way to Euro-integration. And it has been going on for 16 years.

Serbs however are required to give them all their natural resources, he said. Every day his country gets new conditions for the EU accession, he said. The latest is to sell off state enterprises and become a cheap workforce for transnational corporations in their own country.

However Serbs want to become partners with the EU, he said.

"Serious geopolitical changes are beginning to take shape," he said, adding that it started with Brexit, then continued with Trump's victory, then with the victory of pro-Russian or Euroskeptical candidates in Bulgaria and Moldova.

The politician says that he hopes that this tendency will continue during the presidential election re-run in Austria in December this year and next year in France, the Netherlands and Germany. And hopefully, next spring in Serbia, he finally stated.