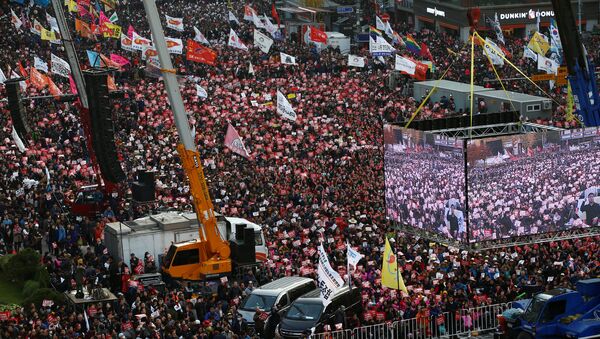 © REUTERS / Jeon Heon-kyun/Pool
Subscribe
A South Korean court allowed farmers driving about 800 tractors to join a scheduled anti-government rally with a restriction on parking the vehicles.

MOSCOW (Sputnik) — According to the Seoul Administrative Court's ruling, the farmers are not allowed to park their heavy vehicles anywhere in the capital during the rally against the country's president, Park Geun-hye, set to be held on Saturday, or drive anywhere near the presidential office, the Korea Times newspaper reported on Friday.

"Although we expect there will be a heavy traffic jam at the time of the rally, we decided to grant an injunction because only 800 farmers will participate in the rally, and the federation will also dispatch 80 people to maintain order … Considering the meaning that the freedom of rally and protest has in a democratic society, it is difficult to find a logical reason to ban their protest," the court said, as quoted by the newspaper.

Tens of Thousands Rally in Seoul Demanding South Korean President's Resignation
On October 24, media reported that Choi Soon-sil, a friend and "shadow adviser" of the president, allegedly received drafts of speeches and presidential documents, which could contain confidential information, though she had never held a public post. The revelation caused a massive anti-government protest in the country, with people calling on the president to step down.

Park is also suspected of involvement in raising funds for two nonprofit foundations dedicated to promotion of South Korean culture and sports, while president’s associate Choi is suspected of money misappropriation from these foundations