Merkel’s Bid for Chancellorship Backed by 64% of Germans 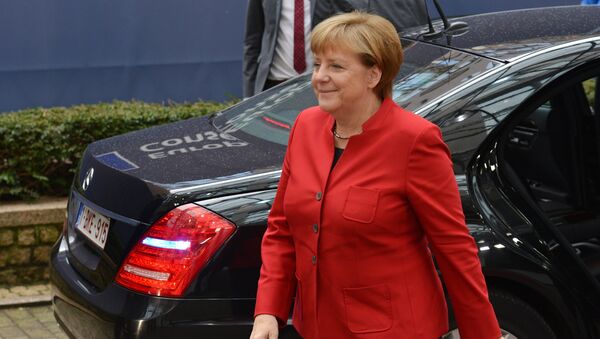 Only 33 percent of 1.258 people polled randomly by phone on November 22-24 said they disapproved of Angela Merkel’s plan to stand for a fourth term, according to the survey.

MOSCOW (Sputnik) — Two in three Germans approve of Chancellor Angela Merkel’s decision to run again in for the position in the elections scheduled for next year, a poll released Friday by the public broadcaster ZDF found.

Only 33 percent of 1.258 people polled randomly by phone on November 22-24 said they disapproved of Merkel’s plan to stand for a fourth term. Inside the ruling bloc of Christian Democrats and Social Democrats (CDU/CSU), her candidacy is backed by 89 percent.

Desire for Stability May Propel Merkel to Fourth Term
Merkel is expected to be challenged by Vice Chancellor Sigmar Gabriel or European Parliament President Martin Schulz, both Social Democrats. The SPD party, Merkel’s junior coalition partner, is due to announce their nominee in late January.

The ZDF survey found that 51 percent of those sampled preferred Schulz to Gabriel, but 47 percent would vote for Merkel if they were to choose between her and Schulz. The chancellor in Germany is chosen by the party that wins parliamentary elections.