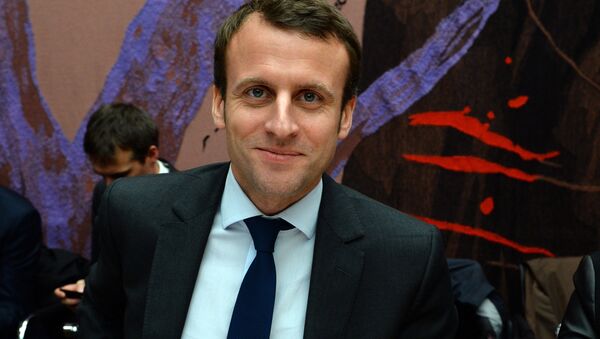 © AFP 2021 / Eric Piermont
Subscribe
France needs to rebuild relations with Russia and engage into intense and frank dialogue, even though Paris' vision does not totally correspond with that of Moscow, French presidential candidate Emmanuel Macron wrote in his book Revolution, a part of which was obtained by Sputnik on Friday.

MOSCOW (Sputnik) — On Thursday, Macron, who declared he would run for presidency in 2017 as independent, unveiled to public his 270-page book Revolution, where the former economy minister presented his view on how France should develop economically, socially, politically and how the country should build its relations with the rest of the world.

"We need to rebuild our relationship with Russia…  I will be open for my part so that we can find an intense and frank dialogue. We will not solve the problem of Crimea in the short term. But we must work with the Russians to stabilize their relationship with Ukraine and allow the gradual lifting of sanctions on both sides," Macron wrote.

He added that Europe and France have been able to "foster a useful partnership" with Moscow in the fight against terrorism and in the energy field.

"We need to find a common ground in the Middle East to restore security in the region. Europe will have to be extremely vigilant in the months to come in order to avoid any discrepancies with Russia, which could see Donald Trump's election as a sign of less attention from the United States toward Europe," Macron suggested.

Resuming his stance on what France's ties with Russia must look like the presidential hopeful admitted that the Russian vision does not correspond totally to that of France.

"It's up to us to take that into account. But we would make a mistake by breaking the bridges with this Eastern European power rather than building a long-term relationship," Macron wrote.

Trump, Fillon Could Have Prevented Syrian Crisis as US, French Presidents
The French presidential elections will be held in two rounds next year. Apart from Macron, other nominees include the leader of the far-right National Front Marine Le Pen, a Republican candidate (whether it is Alain Juppe or Francois Fillon will be known this Sunday upon the final round of party primaries). The ruling Socialist Party will choose its candidate in January primaries, but due to its unpopularity any candidate from the party is widely seen as an outsider of the presidential race.
000000
Newsfeed
0
New firstOld first
loader
LIVE
Заголовок открываемого материала
Access to the chat has been blocked for violating the rules . You will be able to participate again through:∞. If you do not agree with the blocking, please use the feedback form
The discussion is closed. You can participate in the discussion within 24 hours after the publication of the article.
To participate in the discussion
log in or register
loader
Chats
Заголовок открываемого материала
Worldwide
InternationalEnglishEnglishMundoEspañolSpanish
Europe
DeutschlandDeutschGermanFranceFrançaisFrenchΕλλάδαΕλληνικάGreekItaliaItalianoItalianČeská republikaČeštinaCzechPolskaPolskiPolishСрбиjаСрпскиSerbianLatvijaLatviešuLatvianLietuvaLietuviųLithuanianMoldovaMoldoveneascăMoldavianБеларусьБеларускiBelarusian
Transcaucasia
ԱրմենիաՀայերենArmenianАҧсныАҧсышәалаAbkhazХуссар ИрыстонИронауОssetianსაქართველოქართულიGeorgianAzərbaycanАzərbaycancaAzerbaijani
Middle East
Sputnik عربيArabicArabicTürkiyeTürkçeTurkishSputnik ایرانPersianPersianSputnik افغانستانDariDari
Central Asia
ҚазақстанҚазақ тіліKazakhКыргызстанКыргызчаKyrgyzOʻzbekistonЎзбекчаUzbekТоҷикистонТоҷикӣTajik
East & Southeast Asia
Việt NamTiếng ViệtVietnamese日本日本語Japanese中国中文Chinese
South America
BrasilPortuguêsPortuguese
NewsfeedBreaking
19:57 GMTDental Discoveries: Study of Ancient Teeth Debunks Belief First Americans Came From Japan
19:36 GMT'Not Into Golden Showers': Trump Shoots Down 'Pee Tape' Allegations at GOP Retreat, Says Media
19:27 GMTTurkish Military Convoy Targeted in IED Attack Outside Idlib, Injuries Reported
19:00 GMTPorn Actresses Sued Over 'Highly Salient Scandal' Sparked by Alleged Bestiality Tweets, Media Says
18:57 GMTChina Engaging in Major Construction at Airbases Near Taiwan, Satellite Snaps Appear to Show
18:38 GMTSwitzerland Reports 150 Deaths After Vaccination Against COVID-19
17:43 GMTMummified Bodies of Stillborn Girls Served as 'Ultimate Insurance Policy' for King Tut, Says Media
17:28 GMTDeclassified Docs Reveal USSR Planned to Build Advanced Control System for Moon Mission Spacecraft
17:23 GMTMcConnell's Trap: Is GOP Using Looming Default to Gain Political Scores Ahead of 2022 Midterms?
16:51 GMTChina Launches Manned Spacecraft Shenzhou 13 to National Orbital Station
16:44 GMTNew US Treasury Guidelines Warn Crypto Industry of Perils of Sanctions Violations
16:32 GMTPerpetrator of Archery Attack in Norway May Suffer From Mental Illness, Police Say
15:51 GMTTaliban Confirms Participation in Moscow-Format Meeting on Afghanistan
15:44 GMTUnion Jack At Half Mast Over Downing Street As Boris Johnson Leads Tributes To Murdered Tory MP
15:31 GMTTweets Suggest Biden Should Put ‘Time for Nap’ Sign on His Back as POTUS Ignores Press
15:22 GMT'Squid Games – Russian Edition': Watch People Murdered Before 'Killer' Matryoshka
15:02 GMTTwo Injured in Mexico City's International Airport Shooting
14:22 GMTEU Reportedly Threatens ‘Robust Response’ Such as Blocking UK Energy Supplies Amid NI Protocol Row
14:15 GMTBitcoin Exceeds $60,000 First Time Since April
14:11 GMTUS to Require Vaccination From Foreign Visitors Beginning 8 November