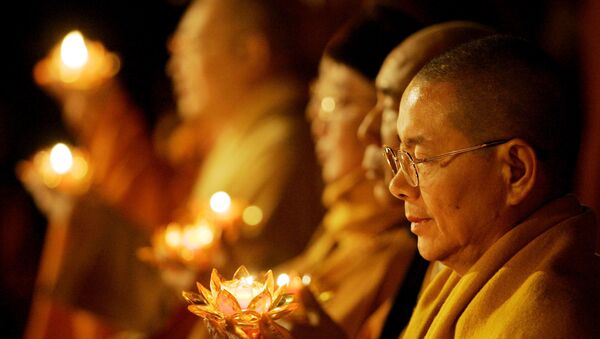 © AP Photo / Eugene Hoshiko
Subscribe
International
India
Africa
Chinese villagers filed an international lawsuit against a Dutch collector to get a sculpture they claim contains their ancestor Master Zhang, a Buddhist monk, returned to Yangchun village in Fujian Province after it was stolen over 20 years ago. After months of negotiations, the contentious case will finally begin next week.

Every year at the beginning of November, Yangchun and Dongpu villages in Sanming, East China's Fujian Province welcome a celebration that is only comparable in the local calendar to Chinese New Year.

"Every year on October 5 of the Lunar Calendar, the birthday of Master Zhang, people from all over the county come to pay their respects," Lin Wenqing, a local villager, told the Southern Metropolis Daily.

Master Zhang, or Zhanggong Zushi, is an ancestor of the village, according to Yangchun village's genealogical records. He was a well-respected Buddhist monk who achieved nirvana during the Northern Song Dynasty (960-1127). After he passed away, his body was gilded and made into a statue. But it was stolen in 1995.

Twenty years later, a villager saw the body of Master Zhang on TV, at an international antique show, in the possession of a collector from the Netherlands. Since then, the villagers have gone on an international pursuit. The collector is due to answer their claims in court before next Wednesday.

Thank you for safekeeping

Asia
China's Lama Initiates Buddhist Ritual in Tibet for First Time in 50 Years
Lin Wenqing, 40, is the deputy director of Yangchun village's relic protection association. In his view, the Buddha sculpture is the glue that holds the village together.

When he was young, the elders in his family would often tell him to be gentle, to be kind and generous like Master Zhang. When two people started arguing, if one suggested they should take the argument in front of Master Zhang and ask him to be the judge, the other would start sweating if they knew they were in the wrong.

Every year, during the first month of the Lunar Calendar, there would be a Master Zhang village tour. In this ceremony, villagers hoisted up statue onto a platform and carried it around all the villages in the county.

Lin was a 19-year-old high school student when the master's statue was stolen, on a date all villagers remember, December 15, 1995.

"It felt like we were struck by lightning at that moment," Lin told the Southern Metropolis Daily. "The statue was so holy to us, who would dare to steal it?"

The day after the statue was stolen, the villagers started looking for it everywhere. They searched nearby temples, went to nearby Fuzhou and Xiamen's custom posts and kept an eye out, some people even went undercover to local relics black markets. But in 20 years, they never received an answer.

Last March, Lin Yongtuan, a villager, was watching the news and noticed that a statue on display at the National Museum of Natural History in Budapest, Hungary resembled Master Zhang. He immediately informed others, who asked their friends in Hungary to check out the statue.

From pictures sent by their scouts, villagers recognized distinctive cracks in the statue's left hand and chin, which led them to believe it was Master Zhang.

Asia
Chinese Robot-Monk Proves That Not All Artificial Intelligence is Evil
The Fujian provincial relic authorities also held investigations into this case after receiving reports from villagers. Experts compared photos of the statue on display to those provided by villagers, as well as family trees, clothing and the platform the statue was hoisted on, and declared that the statue was Master Zhang.

The Chinese national relics protection department also declared that the statue was a stolen relic from Yangchun.

The statue was removed from display in Budapest on March 24, 2015. At the time, the collector's spokesperson said the collector, Oscar van Overeem, had decided to remove the sculpture from display but didn't mention any controversy about ownership.

Later, van Overeem declared he has sufficient proof to show the statue did not come from Yangchun. One argument he made is that his statue was seen in Hong Kong at the end of 1994, while Master Zhang was stolen at the end of 1995.

Even though both sides have different arguments, Lin said villagers feel somewhat grateful to van Overeem.

"At least he kept Master Zhang safe for us for 20 years," he told the Southern Metropolis Daily.

Relics: Section of Buddha’s Skull Said to Have Been Recovered in China
In order to retrieve the Buddha, villagers used all the means at their disposal to collect evidence. At the end of March 2015, they wrote a collective letter to the Dutch prime minister when he paid a visit to China, telling the story of how the Buddha was stolen.

They also tried to negotiate with van Overeem.

According to Lin, Overeem has listed three prerequisites for returning the sculpture. The first is to put the sculpture into a bigger temple; the second is that the Chinese side must help him to do some research which is unrelated to Buddhism including appraising his collection; the third regards "reasonable" compensation.

But villagers have found these conditions hard to accept, especially the first condition.

"Villagers' hope is simple. We just want to put Master Zhang back to where he was," said Lin.

After these unfruitful negotiations, the Yangchun and Dongpu village committees empowered a group of lawyers to file a lawsuit on behalf of all the villagers.

On June 8, a court in the Netherlands formally accepted the case. During this period, Overeem applied twice for the case to be postponed until the middle of August so he could submit more evidence.

When the second extension was due, the Dutch collector demanded the villagers pay 25,000 euros ($26,750) as a guaranteed court fee, citing that the evidence and experts' participation complicated the case.

On October 12, the court ruled that the villagers should pay 2,879 euros as a guaranteed court fee before November 8.

Meanwhile, according to Dutch law, the defendants should submit responding files before 8 November.

It's possible to win

Asia
Buddha's Back: US Returns Stolen Ancient Buddhist Sculpture to Pakistan
In a Xinhua report, Dutch lawyer Jan Holthuis who represents the villagers, said that the key element of the case is that the sculpture is not a Buddhist relic, but a corpse.

According to the Dutch Burial and Cremation Act of 1991 and the interpretation of Minister of Justice at that time, nobody has the right to own a corpse.

"Nobody can therefore own this statue even if it is acquired in good faith. According to Dutch law, the family can claim the statue back. If the family cannot, then the caretaker can," he told Xinhua.

The villagers have hundreds of years of genealogy records concerning the origin of Master Zhang. The records show that he lived and has been worshipped in Yangchun village since the Song Dynasty (960-1279), said Xinhua.

Lin told the Southern Metropolis Daily that the Dutch lawyer's words have strengthened the villagers' confidence.

"We have lost Master Zhang for more than 20 years. No matter how much time we need to spend, no matter how hard it is, we will do our best to repatriate him," said Lin Yongtuan, who first found the sculpture was overseas.

Lin Wenqing added that this case has changed the village for the better.

The cohesion of the whole village has been enhanced. Every villager feels it's their duty to repatriate the sculpture. People pay attention to everything related to retrieving the sculpture, he said.

Meanwhile, Lin explained that as there are an increasing number of people visiting the village and they are improving the surrounding environment and repairing the temple.

The villagers even planned to celebrate Master Zhang's birthday in the Netherlands on October 5th last year. But due to visa problems, they didn't make it.

"For us, Master Zhang is our family and part of our village. We've been with him for a thousand years. This is kinship. The spirit of Master Zhang has been passed down in the village. His philanthropy is known to us. He is the home of our soul," said Lin.

Huo Zhengxin, a professor at the China University of Political Science and Law, told Southern Metropolis Daily even though it might be difficult to win, it was necessary to bring the lawsuit.

He thinks the lawsuit has put pressure on the other party and therefore makes the statue harder to sell. So it's possible that a win-win situation can be settled outside of court through negotiations.

This article originally appeared in the Southern Metropolis Daily and was republished by the Global Times.