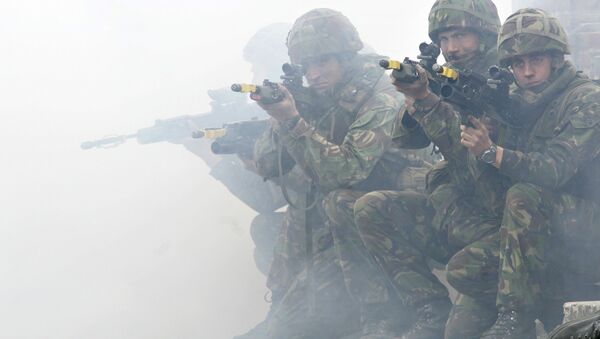 © AFP 2021 / CLAUS FISKER / SCANPIX DENMARK
Subscribe
The United Kingdom will continue to play a key role in NATO after leaving the European Union, UK Prime Minister Theresa May said on Wednesday during a meeting with NATO Secretary General Jens Stoltenberg.

MOSCOW (Sputnik) — May hosted Stoltenberg at Downing Street for a wide-ranging discussion on security issues.

"The Prime Minister reaffirmed the UK’s unwavering support for NATO and said we will remain a cornerstone of the Alliance," a press release published on the UK government website said.

UK Confirms Future Deployment of 800 Troops to Estonia
According to the statement, Stoltenberg agreed that Britain was playing a leading role in NATO by meeting alliance’s "commitment to spend 2 per cent of GDP on defence, contributing troops to deterrence measures in Eastern Europe."

May and Stoltenberg agreed to continue to encourage other NATO members to increase defense spending, since only five countries have met the two percent commitment do far, namely the United States, the United Kingdom, Estonia, Poland and Greece.

"The Prime Minister and Secretary General Stoltenberg agreed that any EU defence proposals should be about strengthening structures within NATO rather than duplicating existing structures," the press release said.

They also discussed how the United Kingdom could "contribute to increasing cyber capabilities among NATO allies."

On June 23, the United Kingdom voted on referendum to leave the European Union. UK Prime Minister said the country would trigger Article 50 by the end of March 2017, thus kick-starting withdrawal negotiations.