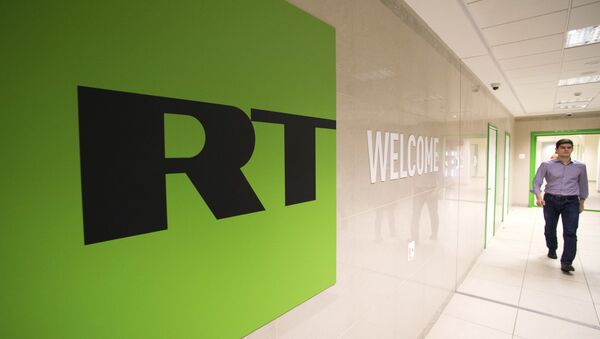 © Sputnik / Evgeny Biyatov
/
Go to the photo bank
Subscribe
The resolution of the European Parliament on counteracting Russian media revealed the EU fear of an opposition point of view and could signal the beginning of the end of the EU system, General Director at the Serbian media company Kompanija Novosti Radomir Dmitrovic told Sputnik on Thursday.

MOSCOW (Sputnik) — On Wednesday, the European Parliament voted in favor of a resolution on countering Russian media outlets, such as the Sputnik news agency and the RT broadcaster. As many as 304 voted in favor of the document, 179 voted against and 208 abstained. With a total of 691 officials taking part in the vote, less than half supported the resolution.

"They do not want Russian position to be heard and do not want an opposite opinion to exist…. If the European Union is afraid of a different opinion, it is the beginning of the end of this system," Dmitrovic said.

He added that those, who finance media in Europe, and particularly in Serbia, were afraid of Russian influence, which showed EU "weakness and fragility".

EU Adopted Resolution on Russian Media in 'Panic' After US Election Outcome
Dmitrovic pointed out that Russian media significantly strengthened its presence during the previous years and became the source of information, who "was destroying the monolith of lies" that existed in the United States and in Europe till recent times.

000000
Popular comments
THEY TYRANTS. IF any country refuses to join, they will begin a regime change. And they use NATO for it. So Russia BETTER begin doing things BACK. Because they won't stop. Like Napoleon, Hitler and others before them, they a CANCER. They spread at alarming rates. With a wave of destruction. And they want to control the world. They see themselves too powerful and too big to fail. But so was others. Remember the 300 hundred? Well there were about 10,000 more. And they could had won. IF they would had get HALF or 3/4 and sent them to prep the other pass, with traps, and what not. And prep arrows, mountains of it. Rocks and much more. Xerxes had an army several times their size. They used force multipliers and traps. Same on WW2. Germany had a COALITION. Was NOT NAZIS alone. Germany by itself wouldn't had last one year. Even while Russia began with T26 and BT7's. The KV1 and T34 were close to what ARMATA is now. Guess Hitler thought it was a good opportunity, before Russia modernized the armies. with all this said, E.U think they super powerful and invincible. The BIGGEST problem is that ALL called international is under this TYRANTS. The best is to begin open international organizations in Russia. China will participate, CIS, EEU. ANd BEST remove all CIS EEU OFF PACE and E.U and open a new PACE inside Russia for theml. IF one BARK , it is sent by E.U to de rail the new competition. U.K tried before. And lost all power. According to the ELEPHANT country.
cast235
25 November 2016, 01:54 GMT
000000
Newsfeed
0
New firstOld first
loader
LIVE
Заголовок открываемого материала
Access to the chat has been blocked for violating the rules . You will be able to participate again through:∞. If you do not agree with the blocking, please use the feedback form
The discussion is closed. You can participate in the discussion within 24 hours after the publication of the article.
To participate in the discussion
log in or register
loader
Chats
Заголовок открываемого материала
Worldwide
InternationalEnglishEnglishMundoEspañolSpanish
Europe
DeutschlandDeutschGermanFranceFrançaisFrenchΕλλάδαΕλληνικάGreekItaliaItalianoItalianČeská republikaČeštinaCzechPolskaPolskiPolishСрбиjаСрпскиSerbianLatvijaLatviešuLatvianLietuvaLietuviųLithuanianMoldovaMoldoveneascăMoldavianБеларусьБеларускiBelarusian
Transcaucasia
ԱրմենիաՀայերենArmenianАҧсныАҧсышәалаAbkhazХуссар ИрыстонИронауОssetianსაქართველოქართულიGeorgianAzərbaycanАzərbaycancaAzerbaijani
Middle East
Sputnik عربيArabicArabicTürkiyeTürkçeTurkishSputnik ایرانPersianPersianSputnik افغانستانDariDari
Central Asia
ҚазақстанҚазақ тіліKazakhКыргызстанКыргызчаKyrgyzOʻzbekistonЎзбекчаUzbekТоҷикистонТоҷикӣTajik
East & Southeast Asia
Việt NamTiếng ViệtVietnamese日本日本語Japanese中国中文Chinese
South America
BrasilPortuguêsPortuguese
NewsfeedBreaking
19:10 GMTDeSantis' Idea to Create Civilian Militia He Would Control Triggers 'Gestapo' Associations Online
18:54 GMTVast Amounts of Explosives, Munitions Reportedly Stolen From, Lost by US Military
18:50 GMTRare Sight of Massive Blue Whale Yawning Filmed From Drone
18:44 GMTRussian Fighters Scrambled to Escort US Spy Planes Over Black Sea
18:44 GMTCritics Target Pentagon's UFO Task Force, Fear Excessive Gov't Control Over Alien Investigations
17:28 GMTParents of Suspected Michigan School Shooter Each Charged With 4 Counts of Involuntary Manslaughter
16:57 GMTBiden Says Getting Cold Reason For His Hoarse Voice, Tests for COVID-19 Every Day
16:48 GMTHunter Biden Joked With Therapist Friend About Joe Biden’s 'Triumph Over Dementia,' New Book Claims
16:30 GMTUS Reportedly Plans Javelin Missile Delivery to Ukraine, Reneges on Surface-to-Air Missiles
16:26 GMTModi Gov't Reveals Why India Bought Russia’s S-400 'Triumf' Despite Threat of US Sanctions
16:20 GMTREC CEO Names Key Benefits for Russian Industrial Zone Residents in Egypt
16:14 GMT'Fake News and False Intelligence': China Hits Back at UK Spy Agency Chief Over 'Debt Traps' Remarks
16:10 GMTOSCE Ministerial Council: Pro-Western Figures in Spotlight, Growing Pressure on Russia, Belarus
16:00 GMTSpanish Lower House Recognises Animals as Sentient Beings
15:59 GMTIsrael’s NSO Reportedly in Covert Deal With Cyber Firm Trained to Exploit Security Weak Spots
15:54 GMTContacts Between Biden, Putin Can Calm ‘Overheated’ Relations, Russian Envoy Says
15:32 GMTScared of Misinformation? Beware of... Cute Cats, NYT Warns
15:00 GMTIndian Cricketer Virat Kohli's Dismissal in Second Test Match Against New Zealand Sparks Controversy
14:53 GMTIndia Deployed Warships at Forward Positions in IOR During Border Clashes With China: Navy Chief
14:52 GMT'Alternative' Mueller Report Could Be Released Soon