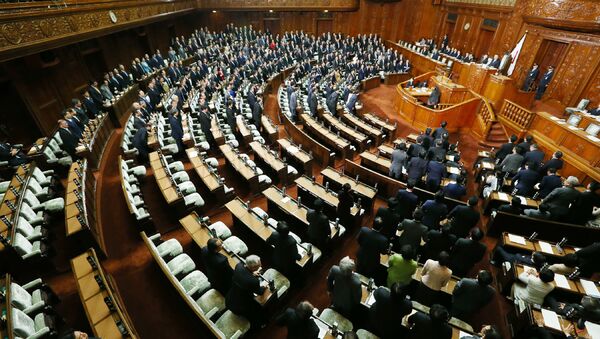 © AFP 2022 / JIJI PRESS
Subscribe
Japan's Finance Minister Taro Aso, a member of the Liberal Democratic Party (LDP) of Japan said that the TPP deal would significantly benefit the Japanese economy and expressed a hope to resume negotiations with Washington on the issue, according to local media.

Japan's Chief Cabinet Secretary Says Too Early to Predict Future of TPP Deal
MOSCOW (Sputnik) — Leaders of the Liberal Democratic Party (LDP) of Japan said they remain committed to the Trans-Pacific Partnership (TPP) free trade deal and would proceed with the approval of the agreement in the national parliament, local media reported Thursday.

US President-elect Donald Trump was very critical of the TTP during the his presidential campaign. On Monday, he said that the United States would quit the TPP agreement on the first day of his tenure as president in January.

Japan's Finance Minister Taro Aso, a member of LDP, said that the TPP deal would significantly benefit the Japanese economy and expressed a hope to resume negotiations with Washington on the issue, the NHK broadcaster reported.

Japanese FM Refrains From Commenting on Trump's Plan to Withdraw US From TPP
LDP's Nobuteru Ishihara, the minister in charge of economic revitalization, said that though the future of TPP deal was put in question, Japan remained strongly committed to the free trade agreement, according to the broadcaster.