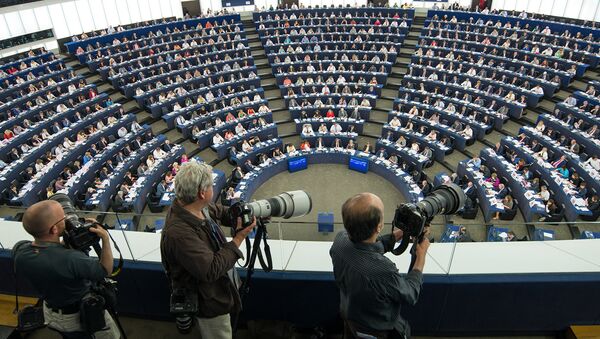 © Flickr / European Parliament
Subscribe
The European Parliament adopted a resolution on counteracting Russian media as it was in panic amid the plurality of opinions on the state of international affairs, for instance, on Russian policy toward Syria, President of the Swiss Press Club Guy Mettan told RIA Novosti on Thursday.

GENEVA (Sputnik) — On Wednesday, the European Parliament voted in favor of a resolution on countering Russian media outlets, such as the Sputnik news agency and the RT broadcaster. As many as 304 voted in favor of the document, 179 voted against and 208 abstained. With a total of 691 officials taking part in the vote, less than half supported the resolution.

"I think they [members of the European Parliament] began to panic because they decided that despite all their efforts to establish a single point of view, it does not work with the European public. So they started to panic. And that is why, the nationalists and extremists from Eastern Europe came out with this proposal," Mettan, who is also the author of the book, titled "The West vs Russia – a thousand year long war: Russophobia from Charlemange to the Ukrainian Crisis," said.

The European politicians realized that public opinion in Europe toward Russia was changing to positive, and people began to understand Russian policy in Syria, Mettan added.

"I think this decision is regrettable since the European Union is able to protect the freedom of expression only by resorting to prohibition of another side. And there is an obvious contradiction in this approach. The resolution of the European Parliament is completely incomprehensible and it runs counter all the stances previously announced by the bloc," Mettan stressed.

'1984': EU Resolution on Russian Media First Step Toward 'Total Censorship'
He suggested that the implementation of such a resolution would lead to a scandal, adding that various press associations should react to the issue since the resolution was unacceptable.

000000
Popular comments
The leaders are in panic mode. They see that the European people don't approve of their liberal sick views. Now the eu leaders decide to censor the European public