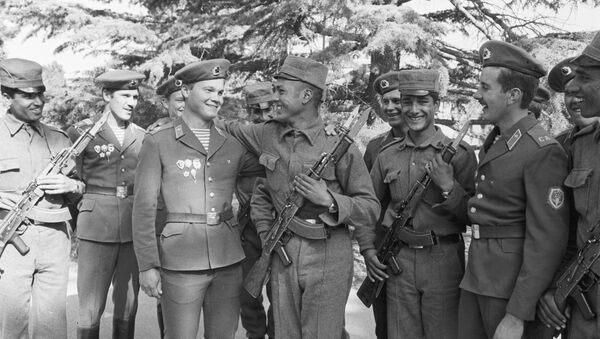 © Sputnik / V. Suhodolskiy
/
Go to the photo bank
Subscribe
Armed conflicts are known to promote the spread of viral diseases, such as typhus or tuberculosis. Recently, an international team of researchers hypothesized that the highly contagious disease emerged in Europe because of the Soviet participation in the war in Afghanistan.

Near Eradicated Disease Strikes Back: TB Outbreak in Swedish Refugee Centers
The international team of researchers, led by Vegard Eldholm from the Norwegian Institute of Public Health, reconstructed the evolution of Mycobacterium Tuberculosis, which is commonly known as Koch's bacillus as is the causative agent of tuberculosis. Microbiologists compared the DNA of different bacteria strains, which are characteristic for Europe, Central Asia and South Asia.

In an article published in the journal Proceedings of the National Academy of Sciences, the researchers theorized that pathogenic bacteria may have occurred in Europe because of the participation of Soviet soldiers in the war in Afghanistan. The armed conflict and the ensuing population displacement is likely to have aided the export of this strain from central Asia to war-torn Afghanistan and beyond, a process which only deteriorated in the wake of the American invasion in 2001.

Some of the viral strains currently found in Europe were reportedly formed in Afghanistan during the war between insurgents and the Afghan forces, backed by Soviet troops. According to the researchers, the bacillus was actually imported from the territory of the USSR only to be later spread by refugees across Europe. Microorganisms in residents in the former Soviet Union were found to have mutations, which are said to have contributed to the emergence of multidrug resistant forms of tuberculosis.

A Continent on Edge: Refugees Bringing Exotic Diseases Into Europe
A comparison of the estimated and known mutations showed that the bacteria found in Central Asia, formerly part of the Soviet Union, have a lot of genes that contribute to resistance. It was also found that most of these mutations arose after the Soviet Union's collapse. The breakdown of the public health system and irregularities in free drug supplies are said to have contributed to the development of drug resistance. Unsanitary conditions and faulty treatment are said to trigger resistance to antibiotics.

According to the scientists, their findings demonstrate how political instability and armed conflicts can contribute to both the spread of infections and an increased bacterial resistance to drugs.

The tubercle bacillus is believed to have originated in the Horn of Africa. The common ancestor of all TB bacteria is said to have existed some 40,000 to 70,000 years ago. As settlers left the African continent for new territories, the spread of tuberculosis across the globe began. Today, there are seven types of TB bacteria that differ in unique genetic sequences.

Each year, TB infects at least 9 million people and kills 2 million. Classic symptoms of TB include fever, night sweats, weight loss and fatigue. For pulmonary tuberculosis the telltale symptom is persistent coughing of phlegm and blood.