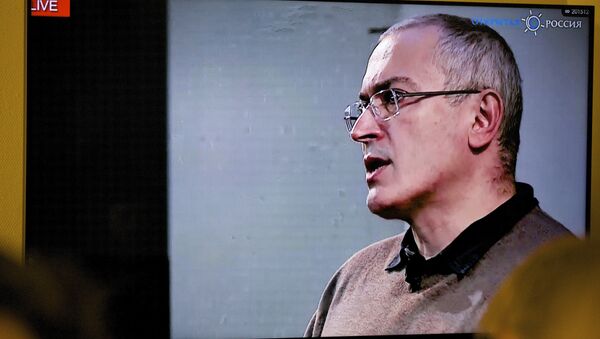 MOSCOW (Sputnik) — The funds, frozen since March 2011 on request from the Irish police could have gone from the Yukos oil company, once owned by Khodorkovsky, into a “labyrinthine series” of trusts linked to particular individuals, Ireland’s Senior Counsel Michael McDowell said, as quoted by the Irish Times newspaper.

Russia
Khodorkovsky’s Project Seeking Presidential Candidates Out of Agenda – Kremlin
According to the newspaper, Khodorkovsky was the owner of the funds, which have been frozen by the Irish state for five and a half years under the Criminal Justice (Money Laundering and Terrorist Financing) Act 2010. The Garda Bureau of Fraud Investigation (GBFI), a specialized division of Ireland’s national police, considers the funds to be the subject of an ongoing money-laundering investigation.

Arrested in Russia on October 25, 2003, former head of the Yukos oil company Khodorkovsky spent 10 years in prison over fraud and tax evasion before being pardoned. Following his release, he left the country.

In December 2015, a Russian court charged Khodorkovsky, who was then in London, in absentia for organizing the 1998 murder of Vladimir Petukhov, the mayor of the western Siberian town of Nefteyugansk. In February, Russia sent a request to the global police service, Interpol, asking for Khodorkovsky to be placed on the international wanted list.