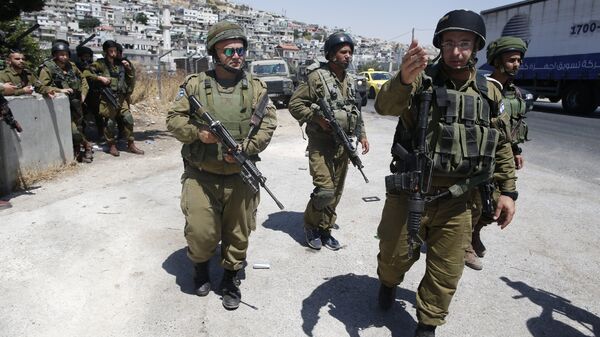 Israel’s treatment of Palestinians in the West Bank city of Hebron amounts to “apartheid,” a British MP has said, while government ministers have criticized Israeli government plans to expand Jewish settlements in the occupied Palestinian territories.

Speaking during questions to Foreign Office ministers in the House of Commons, Desmond Swayne, the conservative MP who was the UK's international development minister until earlier this year, asked the government for its opinion on the situation in Hebron, where Palestinians are barred from entering certain streets of the city.

Swayne asked minister Tobias Ellwood: "Has he walked the streets of Hebron, which Palestinians may not use? We used to call that apartheid."

"Has he walked the streets of Hebron which Palestinians may not use? We used to call that apartheid " ex @DFID_UK minister @DesmondSwayne pic.twitter.com/IKJ5uTK0Sg

​In response, Ellwood described Swayne's description of the situation as "lucid."

"My honorable friend in his lucid way outlines the challenges that we face in Israel and indeed the West Bank," he said.

"It is important that we are able to ensure that security measures that we spoke of at the initial question are about to provide those confidence building measures so that we can bring people back to the table. I do hope this is something the American administration will want to lean into."

Hebron, which is located in the occupied Palestinian territory of the West Bank, contains heavily fortified Jewish settlements in certain parts of the city, while the Israeli government has announced plans to expand the settlements.

Palestinians are at times subjected to restrictions when traveling around the city, with roads regularly closed and armed security check-points established.

​Ellwood condemned Israel's decision to expand the settlements, which are illegal under international law, while Philip Luther, Amnesty International director for the Middle East said earlier this year that on top of existing rules prohibiting the movement of Palestinians in the city, "new restrictions have compounded these violations and intensified the collective punishment of tens of thousands of Palestinians, in violation of international law."

Israel has defended its actions in the city, arguing that increased security is required across the West Bank in the wake of attacks against Jewish people.

However, Swayne's comments on the situation in Hebron have not gathered universal praise, with Labour MP Ian Austin describing the apartheid comparison as "an insult" to Israel and to black South Africans who suffered under their government's racist policies.

"In South Africa, black people were not able to vote, all political opposition was outlawed, different races couldn't even get married."

​"In Israel, there is freedom of movement, assembly and speech, all governmental institutions are integrated, all citizens can vote.

"So is it not a complete disgrace, an insult to the Middle East's only democracy and the black people who suffered under apartheid, to hear Israel described as apartheid, as we heard a former minister do?"