Ekaterina Blinova
All materialsWrite to the author
Donald Trump was the only presidential candidate who highlighted that the Clinton-backed earthquake recovery project in Haiti was an absolute disgrace, Dr. Dady Chery, a Haitian-born journalist, told Sputnik, adding that she believes that Haitian-Americans are not the only ones who voted for Trump to see the Clintons brought to justice.

Donald Trump won't appoint a special prosecutor to investigate Hillary Clinton, as he promised back in October, the US President-elect's aide signaled Tuesday.

Hillary Clinton should have been prosecuted and should be in jail. Instead she is running for president in what looks like a rigged election

​"I think when the President-elect, who's also the head of your party, tells you before he's even inaugurated that he doesn't wish to pursue these charges, it sends a very strong message, tone and content," Kellyanne Conway, former Trump's campaign manager, told MSNBC as quoted by The Daily Caller News Foundation.

The question then arises, whether controversial episodes such as, for example, the Clintons' role in the recovery project in Haiti back in 2010, will be simply swept under the rug.

After Wikileaks released Hillary Clinton's personal emails it became clear that the US response to Haiti earthquake back in 2010 was hardly a "success story."

"People were still in mourning, about three weeks after the devastating earthquake of January 12, 2010, when the US Ambassador to Haiti, Kenneth Merten, wrote a situation paper for the State Department, and he cheerfully titled a section of it 'The Gold Rush is on!' Thanks to a Wikileaks cable from February 1, 2010, we know that the State Department was privately cheering Haiti's misfortune while Secretary Hillary Clinton was publicly acting like she was heartbroken about Haiti," Dr. Dady Chery, a Haitian-born journalist and News Junkie Post Co-Editor in Chief told Sputnik.

US Media to 'Get Even' After Clinton's Loss Amid Crackdown on 'Fake News Sites'
"The gold rush meant an avalanche of Haitian contracts to private businesses. It also meant many grants and contracts from USAID to politically connected contractors from the Washington DC area. Most of them were 'Friends of Bill,' or 'FOBs,' who had made donations to the Clinton Foundation, as we also learned from an ABC News investigation and Freedom of Information Act documents," Chery continued.

The journalist recalled that the United States Agency for International Development (USAID) gave out about $1.5 billion of grants and contracts for the Caribbean country in 2010 but only 35 percent of the sum was spent by 2012.

What is more embarrassing is that there were no financial reviews and virtually no accounting of the expenditures, the journalist stressed.

"Immediately after the earthquake, the Clintons also collected about $30 million for Haiti through the Clinton Foundation. From the foundation's taxes, we know that only about 10 percent of funds were spent on charity, so only about $3 million were spent on Haiti, and it is unclear how. There were also about $54 million from the Bush-Clinton Fund, but most of that money was spent on mortgages, microfinance, and on refurbishing and building luxury hotels," Chery told Sputnik.

However, that is half the story. 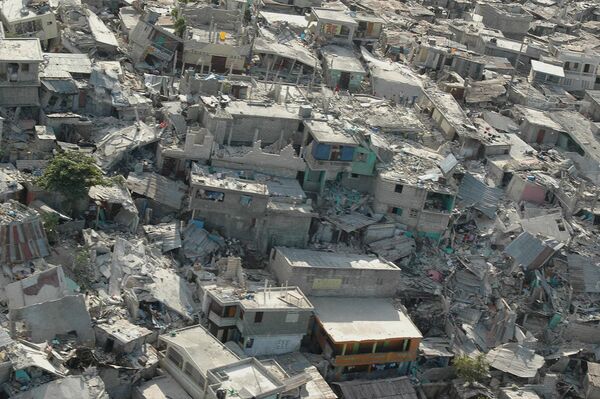 The Interim Haiti Recovery Commission (IHRC), chaired by Bill Clinton, literally took over the reins of the Caribbean country in April 2010, after Haiti's President, Rene Preval, was pressured into declaring a state of emergency.

"In what was essentially a coup, President Preval was stripped of his power and allowed only a symbolic veto," Chery underscored.

America's Rebalance: Trump's Election Opened Door to New Global Order
"Right after the IHRC was formed, Haiti's legislators organized massive nationwide protests that went on for months. Throughout Haiti, people called the state of emergency, a 'coup d'etat d'urgence,'" she pointed out.

The only way the Clintons could sustain power over Haiti was to push Preval to organize presidential elections, Chery noted.

Citing an interview of Ricardo Seitenfus, then Special Representative of the OAS (Organization of the American States), the journalist highlighted that the elections were rigged and Clinton-backed Michel Martelly won the presidency.

"With Martelly in place, the Clintons did whatever they wanted. By July 2011, three months before the IHRC's 18-month mandate was over, they had collected $3.2 billion and spent only $84 million doing only five out of 75 projects they had planned," the Haitian journalist stressed.

"In a meeting on August 11, 2011, the Chair of the Senate Public Works Committee accused the IHRC of taking credit for projects that had been funded before it even existed. The IHRC was not renewed by Haiti's parliament, but the Clintons kept right on raising money. By 2012, the IHRC had collected $5.9 billion out of a total of $9.5 billion of pledged donations," she underscored. 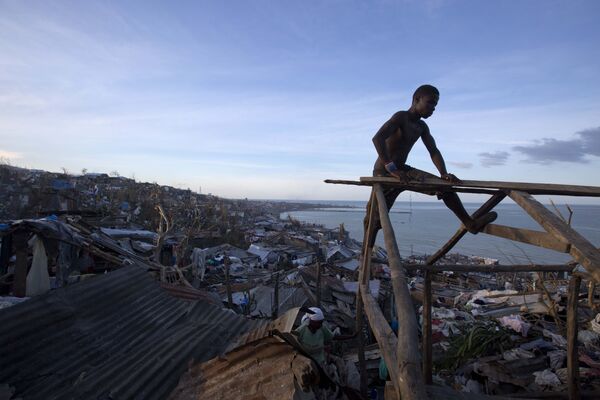 A resident works to repair his roof after it was ripped away by Hurricane Matthew in Jeremie, Haiti, Friday, Oct. 7, 2016
© AP Photo / Dieu Nalio Chery

Donald Trump Shed Light on the Clintons' Disgrace in Haiti

Chery emphasized that Donald Trump was the only presidential candidate to mention Haiti as being a disgrace for Hillary Clinton.

"New emails revealed today by ABC News show that during the deadly earthquake in Haiti, which killed over 150,000 people, the Clintons couldn't stop cashing in," Trump's campaign website said.

"In their biggest project, the Clintons used $400 million in aid and US taxpayer funds to build what amounted to a sweatshop," the website read, referring to yet another controversial project kicked off by the Clintons in Haiti — the Caracol Industrial Park.

How can the US under Trump help Haiti to recover from the disaster caused by the Clinton's policies against the Caribbean country?

Chery called attention to the fact that "Haiti needs justice and fairness from the US much more than it needs foreign aid."

'Family Business': Who Gave Money to Clinton Foundation
"Many aspects of Clinton's dictatorship continue today. First, there is the fact that more than 96 percent of Haiti's reconstruction funds have disappeared. If the Clintons are tried under the Racketeer Influenced and Corrupt Organizations Act (RICO) and found guilty, some of this money could be recovered, at the least by confiscating their properties," the Haitian journalist suggested.

"Another Clinton policy that continues to damage Haiti is the sale of subsidized rice to the country, mostly from Arkansas," she added, "This is bad for Haitian agriculture, which cannot compete against subsidized goods."

But what it more important, Chery pointed out, "a Trump government could adopt and enforce a policy of noninterference in Haiti's political affairs."

Alas, the story of the Clintons' involvement in Haiti is far from being over, the journalist remarked, assuming that Bill and Hillary Clinton may still use their UN connections to "keep their hooks" in the small Caribbean country.

"After all, they have a financial interest in Haiti's gold mines through Hillary's brother, Tony Rodham," she noted.

"I don't think Haitian-Americans are the only ones who voted for Trump mainly because they wanted to see the Clintons brought to justice. There are many Americans who object to their government being peddled like a stolen watch on a street corner," Chery concluded.