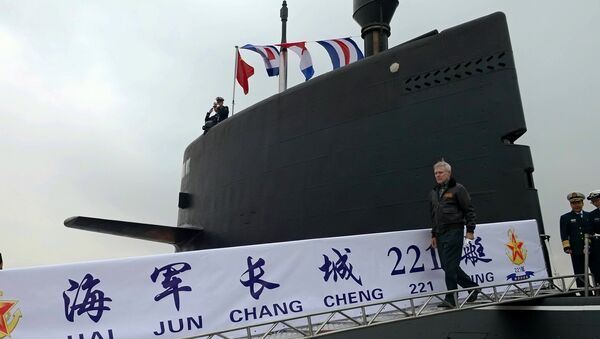 Canada, Bangladesh Foreign Ministers Set to Discuss Economic Ties in Ottawa
India's eastern neighbor Bangladesh acquired two diesel-electric submarines from China on November 14. After they enter service in 2017, they will become the first and only submarines in the Bangladeshi navy.

The move has raised questions, since Bangladesh is surrounded by Indian territories on three sides, sharing only a fraction of its border with Myanmar on the East. Defense News has interviewed experts on this issue.

Bangladesh currently has no territorial or maritime claims, after all such disputes with India and Myanmar were settled in 2012 and 2014, respectively.

"It is difficult to fathom why Bangladesh, which does not encounter any conventional maritime-military threat, has inducted submarines in its navy," said Gurpreet Khurana, an Indian Navy captain and executive director of the National Maritime Foundation.

The diesel-electric submarines, capable of carrying torpedoes and mines, are believed to be strictly offensive weaponry, but with a navy so small, Bangladesh is far from capable of withstanding any serious naval conflict with India. According to Indian experts, one possible explanation is an act of provocation against Indian maritime security.

"Submarines are offensive weapons of sea denial and their only use would be to pose a threat in being for India and to complicate the latter's maritime security paradigm," said Arun Prakash, a retired Indian Navy admiral and former service chief.

Russia's Rosatom Opens Regional Center in Mumbai for India, Bangladesh
Prakash also believes that the sale is a step in a long-standing Chinese policy of encircling India with client states who are dependent on China. Both India and China are significant weapon manufacturers, with India seeking to become one of the world's largest arms exporters, according to Bloomberg. Snatching regional markets from India is a logical act of competition.

"It is just a good, economical deal Dhaka could not pass up," said Bharat Karnad, a research professor at the India-based think tank Centre for Policy Research.

The Bangladesh Navy has a long history of purchasing naval weaponry from China. But the procurement of the submarines is likely to raise tensions in the region, said Swaran Singh, a professor for diplomacy and disarmament at Jawaharlal Nehru University in India.

"[The] transfer of submarines means major upgradation of [Bangladesh and China] defense cooperation and would contribute to South Asia becoming a far more contested space infested with new weapon systems," he said.

New Delhi must make attempts to secure the Bangladeshi market for domestic weapons manufacturers, according to Defense News. Indian Defense Minister Manohar Parrikar is currently visiting Bangladesh to "upgrade bilateral defense cooperation." Despite that the two countries have no territorial dispute, they are yet to sign a water-sharing agreement, a significant stumbling block for New Delhi. If suggestions about provocations and "sea denial" functions of the submarines are correct, negotiations are about to become tougher.

"Bangladesh is our neighbor, and its strategic importance cannot be understated in any way. Such events as the purchase of submarines by Bangladesh greatly enhances the mistrust between the countries and  steps must be taken to reduce this gap and prevent Bangladesh from playing the China card repeatedly," said Probal Ghosh, a senior fellow at the Observer Research Foundation, an organization dedicated to leading political and policy discussions in India.

000000
Popular comments
India was so proud that she conducted drill in the South China Sea, so in response, china sell subs to india closest neighbor, great move
peaceactivist2
24 November 2016, 02:25 GMT2
000000
peaceactivist2, Same as I thought. And then with U.S, behind the MAKE IN INDIA. Russia is the guilty party , that India go to space, and have so much weapons. Russia even lately taught INDIA how to miniaturize a nuclear reactor for submarines. That would had take at least a decade. Because after you create it, it MUST comply or you have a portable fish x rays machine under water.
cast235
24 November 2016, 04:03 GMT
000000
Newsfeed
0
New firstOld first
loader
LIVE
Заголовок открываемого материала
Access to the chat has been blocked for violating the rules . You will be able to participate again through:∞. If you do not agree with the blocking, please use the feedback form
The discussion is closed. You can participate in the discussion within 24 hours after the publication of the article.
To participate in the discussion
log in or register
loader
Chats
Заголовок открываемого материала
Worldwide
InternationalEnglishEnglishMundoEspañolSpanish
Europe
DeutschlandDeutschGermanFranceFrançaisFrenchΕλλάδαΕλληνικάGreekItaliaItalianoItalianČeská republikaČeštinaCzechPolskaPolskiPolishСрбиjаСрпскиSerbianLatvijaLatviešuLatvianLietuvaLietuviųLithuanianMoldovaMoldoveneascăMoldavianБеларусьБеларускiBelarusian
Transcaucasia
ԱրմենիաՀայերենArmenianАҧсныАҧсышәалаAbkhazХуссар ИрыстонИронауОssetianსაქართველოქართულიGeorgianAzərbaycanАzərbaycancaAzerbaijani
Middle East
Sputnik عربيArabicArabicTürkiyeTürkçeTurkishSputnik ایرانPersianPersianSputnik افغانستانDariDari
Central Asia
ҚазақстанҚазақ тіліKazakhКыргызстанКыргызчаKyrgyzOʻzbekistonЎзбекчаUzbekТоҷикистонТоҷикӣTajik
East & Southeast Asia
Việt NamTiếng ViệtVietnamese日本日本語Japanese中国中文Chinese
South America
BrasilPortuguêsPortuguese
NewsfeedBreaking
03:29 GMTNot That They Were Expected in the First Place
03:21 GMTUS Senate Rejects Resolution to Block $650Mln in Arms Sales to Saudi Arabia
03:09 GMTCharlottesville to Move Statue of Gen. Lee to Museum to Be Melted Into New Monument
03:03 GMTUS House Passes $768Bln Defense Spending Bill, Sends to Senate for Vote
02:45 GMTEx-Playboy Star Holly Madison Claims Hefner Was Abusive, 'Screaming' at Her for Cutting Hair Short
02:32 GMTUS Senate Confirms Biden Border Agency Chief Amid Immigration Crisis
02:13 GMTQueen, Her Corgis Could Be Attacked By Wolves & Bears if Royal Estates Rewilded, Tory Peer Says
00:59 GMTSmollett Becomes Aggressive During Trial When Cornered by Texts With Alleged Attacker - Report
00:45 GMTOmarova Backs Out of Biden Comptroller Nomination After GOP Attacks Claiming She’s a Communist
00:38 GMTPope Francis Compares EU’s Offer to Remove ‘Christmas’ For Inclusiveness With Fascist Rule
00:09 GMTWatch: South Korea Unveils Model for Hypersonic Weapon Prototype Days After US Blasted China’s Tests
YesterdayPutin-Biden Call: Key Points Discussed by US, Russian Presidents During Video Meeting
YesterdayWall Street Rallies Second Day in Row as Omicron Fears Fade, Tech Stocks up 3%
YesterdayUS Certifies Black Hawk Helicopter Model for Civilian Use
YesterdayPentagon Confirms Presence of US Forces in Ukraine, Declines to Disclose Number
YesterdayAmericans, Russians Dislike Each Other's Leadership - Polls
YesterdayUS House Capitol Assault Panel Threatens to Hold Ex-Trump Chief-of-Staff in Contempt
YesterdayCome to Daddy: Court Rules Australian Man Has Right to Over $50Bln in Bitcoin Stash
YesterdayCarjackers Make Use of Apple's Tracking Gadget, Police Say
YesterdayNever-Trumpers Hire Beltway Lobby Firm in Bid to Limit Presidential Powers