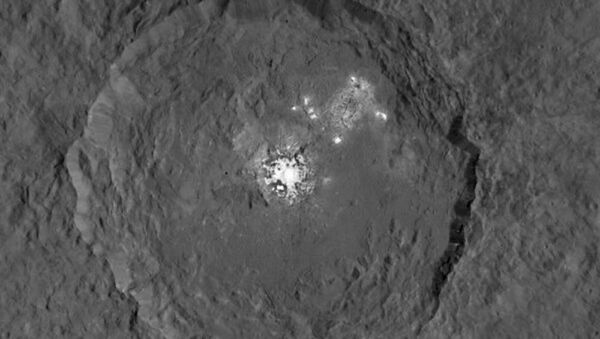 NASA has released stunning new photographs of the dwarf planet Ceres captured by the Dawn unmanned spacecraft as it prepares to continue its exploration of regions between Mars and Jupiter in the Solar System’s asteroid belt.

Cargo Spacecraft Cygnus Leaves International Space Station - NASA
The spacecraft, launched in 2007, first traveled to the protoplanet Vesta, entering its orbit on July 2011. On March 6, 2015, the spacecraft entered into orbit around Ceres, and has since transmitted to Earth tens of thousands of images and gigabytes of other valuable data about the celestial body.

One of the most intriguing images came in early October, while Dawn was about 920 miles (1,480 km) above the surface of Ceres and at an angle where the sun's position showed interesting reflections not seen during the first four orbits. The image clearly reveals enigmatic bright regions at the bottom of the dwarf planet's huge Occator Crater, which scientists believe is a sign of recent geologic activity.

NASA Launches Atlas V Rocket With Revolutionary Weather Satellite Into Space
The large Occator Crater is about 57 miles (92 kilometers) wide and some 2.5 miles deep. According to planetary scientists, the crater's unusual pattern may be the result of a highly-mineral liquid emerging from below the surface as a result of an asteroid strike. The liquid is thought to have frozen and then sublimated, leaving behind various salts.

Another intriguing image, made with the help of the German Aerospace Center in Berlin, reveals how Ceres would appear to the human eye in natural light wavelengths. Image colorizing was based on how the dwarf planet reflects varying light wavelengths.

​Dawn's primary mission was completed in July, but NASA has extended its journey as the probe continues to function. The spacecraft's new orbit will be 4,500 miles (7,242 km) from Ceres where it can make additional measurements and allow refinement of already existing data.