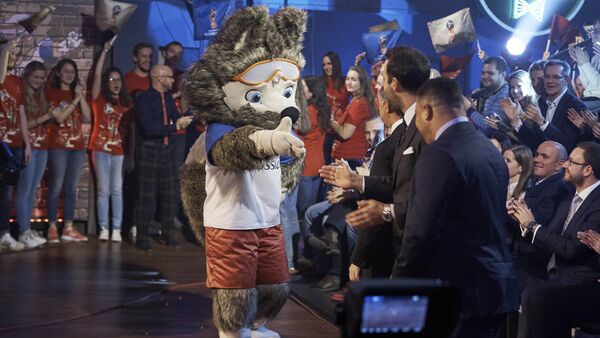 © AP Photo / Pool Photo
Subscribe
Russia has not yet purchased broadcasting rights for the 2018 FIFA World Cup in the country because of overpricing, Deputy Foreign Minister Vitaly Mutko said Tuesday.

Wolf Becomes Official Mascot of FIFA World Cup 2018 in Russia
MOSCOW (Sputnik) — The 2018 FIFA World Cup will be held from June 14 to July 15 across nearly a dozen Russian cities, including Moscow, St. Petersburg, Kaliningrad, Rostov-on-Don, Sochi and Volgograd. According to chief of the Russia 2018 Organizing Committee Alexei Sorokin, over $10 billion is expected to be spent on the first football championship on Russian soil.

"So far, Russia has not acquired the rights to broadcast the football World Cup, although there is a pool of companies," Mutko told reporters. "The price in our opinion is too high. The rights used to cost $32 million, and now they want to sell them for $100 [million]."