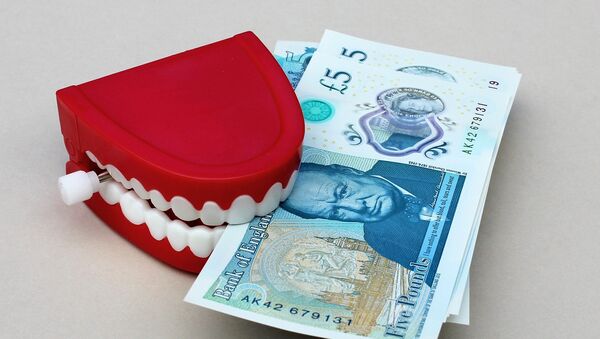 © Photo : Pixabay
Subscribe
Britain's pound sterling has lost 20 percent of its value, following the UK's decision to leave the European Union on June 23. According to a survey by Credit Suisse, the Global Wealth Report, the cost of Brexit on British households is US$1.5 trillion.

This also means 400,000 people have lost their millionaire status — not an issue that would usually invoke a chorus of violin strings — but nevertheless — Brexit doesn't just mean Brexit, it means regular families are starting to feel the pinch — millionaires or not.

​Marmite, the great British breakfast spread, became one of the first examples of how the tumbling sterling value impacted everyday house hold items.

​Unilever, the global manufactures of Marmite, hiked the price up passing off the increase in production costs as a result of the tumbling sterling onto shoppers. This infuriated supermarket giant Tesco, which bases itself on being able to offer value for money on everyday items — like Marmite — to its customers.

Ben & Jerry's, PG Tips, Dove and Flora All Gone? Brexit Emptying UK Supermarkets
But since Brexit, UK household wealth has fallen by 1.3 trillion pounds — which means 406,000 people have lost their millionaire status — while others — who aren't millionaires have to cut back on Marmite.

The recent findings from the Credit Suisse Research Institute's seventh annual Global Wealth Report, found that overall growth around the globe remained flat during 2016, contrasting sharply to the surge in growth before the global financial crisis of 2008.

"The impact of the Brexit vote is widely thought of in terms of GDP but the impact on household wealth bears watching," Michael O'Sullivan, chief investment officer at Credit Suisse said.

​Millionaire or not — Brexit is still having an effect on the value of the pound in everybody's pocket.

Charity, Oxfam says that the growing gap between rich and poor is "undermining economies, destabilizing societies and holding back the fight against poverty."

Sally Copley, Oxfam spokesperson said: "The wealthiest one percent of the population — who own nearly a quarter of all the country's wealth — continue to do well whilst do many people in Britain are just about managing to stay above the poverty line."