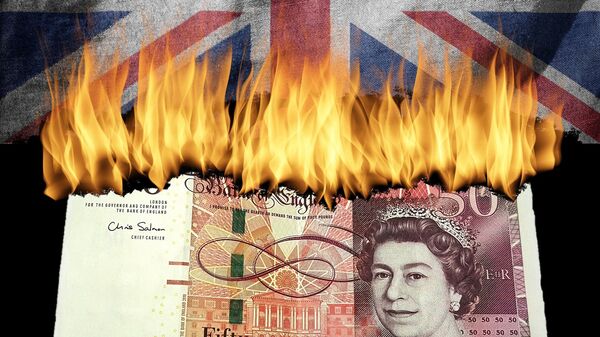 CC0 / PIxabay /
Subscribe
This year’s Brexit referendum and the entailing volatility in the pound’s FX rate and the plunge in FTSE equities have resulted in British household wealth having declined, along with the number of the UK’s dollar millionaires.

Kristian Rouz – Shifts in patterns of international exchange in goods and services entailing the UK’s referendum on separation from the European Union (EU) has resulted in narrowing the wealth gap in Britain, affecting the upper class.

British Tycoons Setting Up Major Campaign for UK Exit From EU
In the aftermath of the referendum, the declines in the pound sterling’s FX rate and rife volatility in the stock market has resulted in the number of the British dollar millionaires having declined substantially.

With an across-the-board economic readjustment underway, generation and accumulation of wealth are poised to gain in select sectors of the economy, including manufacturing, but likely outside of the UK’s traditional powerhouses of real estate and Canary Wharf.

The UK has shed roughly 400,000, or 15pc, of its dollar millionaires since the Brexit referendum on 23 June as a consequence of the subsequent tumult in Britain’s financial sector. The UK, however, is formally still a part of the bloc, and various Brexit scenarios are still subject to consideration in the Her Majesty’s Cabinet and the Parliament.

Nonetheless, investors and other market participants have been hedging against the risks associated with the ‘hard Brexit’ scenario, dumping the most volatile and overexposed assets, weighing on the fortunes of other holders of these types of investment.

According to the Global Wealth report by the Swiss bank Credit Suisse Group AG, UK household wealth declined by $1.5 trln, or 10pc, in the Brexit referendum’s aftermath. One of the greatest slumps in wealth amongst the advanced economies, the British fortune carnage resulted in a decline in number of dollar millionaires. Meanwhile, even more people might have lost their status of sterling millionaires, remaining in the dollar millionaire group, as suggested by the pound/dollar FX rates correlation – the issue outside the scope of the report.

"The U.K. had a tumultuous end to 2015-2016, with sharp declines in the exchange rate and the stock market following the vote to leave the EU," Credit Suisse analysts wrote. "The outlook is very uncertain, both for the economy and household wealth."

British Economy Expands 2.3pc in Q3, Quelling Brexit Anxiety
In the rest of the world, only Argentina, Egypt, Mexico, Russia, and Ukraine have experienced a greater percentage decline in household wealth this year. The losses in China and Switzerland were less than those in the UK, and the losses in Russia’s household wealth in absolute numbers were less than the UK’s, too.

The UK’s economy for roughly three decades has been driven predominantly by such industries as oil and natural gas, real estate, and financial services – aside of household consumption that constitutes the basis of any advanced economy in the present age.

The post-Brexit realignment in British exports and imports, and a weaker sterling have suggested that the manufacturing and utilities sectors have better odds of becoming the new growth machine behind the UK’s still-robust expansion. Financials are poised to lose their influence and importance insignificantly, whilst real estate’s safe-haven status has been battered by the tumble in property values.

"The impact of the Brexit vote is widely thought of in terms of GDP, but the impact on household wealth bears watching," Michael O’Sullivan of Credit Suisse said. "Since the Brexit vote, UK household wealth has fallen by $1.5 trln. Wealth per adult has already dropped by $33,000 to $289,000 since the end of June. In fact, in US dollar terms, 406,000 people in the UK are no longer millionaires."

The UK’s $14 trln worth of individual wealth is distributed between some 49 mln of the nation’s adult population. Roughly 5pc of that are worth $1 mln or above. The Brexit referendum-inflicted hit to the UK’s equities and real estate has been all but erased by the more recent gains, however, many households have failed to capitalise of the relief rally after the 3Q16 GDP results shown a less gloomy macroeconomic landscape.

"The wealthiest one per cent of the population – who own nearly a quarter of all the country’s wealth – continue to do well whilst so many people in Britain are just about managing to stay above the poverty line," Sally Copley of Oxfam said.

Post-Brexit Britain Uncertainty With London Facing US$100 Billion Black Hole
In other nations, household wealth has increased in Japan the most, by almost $4 trln, to $24 trln. Japan is followed by the US (plus $1.6 trln to $85 trln), Germany (plus $0.3 trln), and Brazil (plus $0.1 trln).

The fluctuations in FX rates have been the main factor as the US dollar and the Japanese yen have gained in value against a basket of currencies due to their safe-haven status in the period of international turbulence, whilst the German powerhouse economy has continued to foster the accumulation of wealth. The British pound, the Swiss franc and the onshore and offshore renminbi have all devalued during the period.

Global wealth has gained 1.4pc to $256 trln due to the slow GDP growth, and Credit Suisse projected the figure to increase to $334 trln by year 2021.