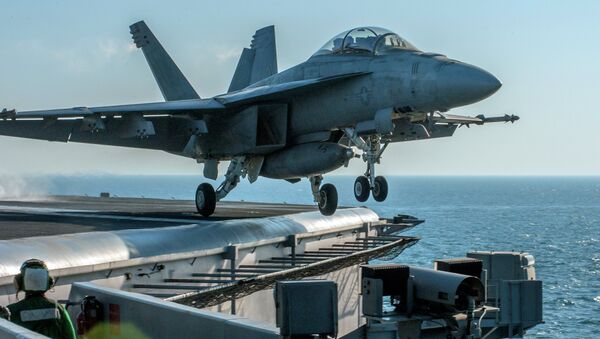 © AFP 2023 / US NAVY / MC2 JACOB G. SISCO
Subscribe
International
India
Africa
The US-led coalition against the Islamic State (IS, or Daesh) did not carry out an airstrike in the village of al-Salehia in Syria’s Raqqa province, as reported by Syrian media, US Department of Defense spokesman Eric Pahon told Sputnik on Monday.

"I cannot confirm whether this incident occurred, but I can confirm the coalition did not conduct a strike in that area. This was not the coalition," Pahon stated.

According to SANA, citing local sources, the US-led coalition targeted an area where a cotton processing factory is located.

UN Must Name Terrorists Responsible for Killing Civilians in Syria - Moscow
Three factory workers, a resident pf al-Salehia village, as well as a family of six people, including children, were killed in the strike, according to SANA.

In October, the rights group Amnesty International released a report stating that the US-led coalition's strikes in Syria had killed at least 300 civilians in the past two years.

The watchdog called for thorough investigation into reports of civilian deaths, adding that the US authorities had not given any response to a memorandum sent by the watchdog questioning the conduct of coalition forces in Syria.