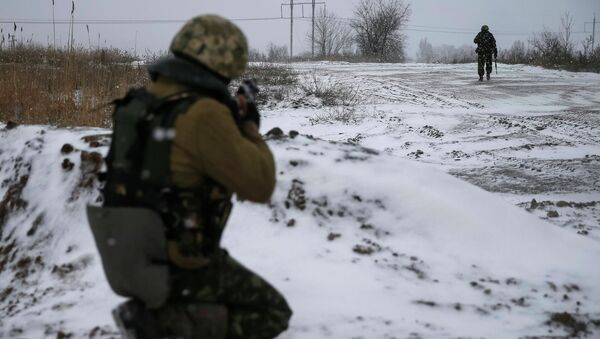 © REUTERS / Gleb Garanich
Subscribe
The people detained in Crimea on suspicion of plotting acts of sabotage against infrastructure on the peninsula are no longer officers of the Ukrainian Armed Forces, Ukraine Defense Ministry spokesman Andriy Lysenko said Monday.

"Those are people, who retired from military service long ago, [they] were businessmen, lived there [in Crimea] and had families. It is clear, that the people have [undergone] some kind of training, by they are not incumbent servicemen, including, [they do not serve in] Ukraine’s Armed Forces," Lysenko told 112 Ukraine television channel.

Russia's historical southern region of Crimea rejoined the country after a 2014 referendum. Almost 97 percent of the region's population voted for reunification in a referendum. Sevastopol, which has a federal city status, supported the move by 95.6 percent of votes. Ukraine, as well as the European Union, the United States and their allies, did not recognize the move and consider the peninsula to be an occupied territory.