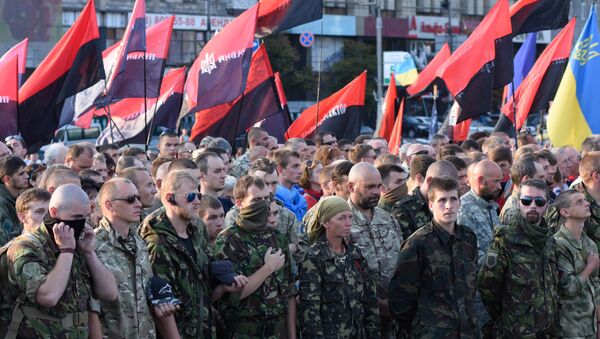 © Sputnik / Stringer
/
Go to the mediabank
Subscribe
International
India
Africa
A total of 3 people were injured at a rally held in the Ukraine’s capital of Kiev to mark the anniversary of the Euromaidan, the country’s national police said on Monday.

KIEV (Sputnik) — Earlier in the day, several hundreds of people gathered at the Kiev’s central Independence Square, known as Maidan, to celebrate the Dignity and Freedom Day, devoted to the third anniversary of the protests, which sparked in Kiev in 2013.

"Reports by medical workers about three victims, who got injured during the event, have been received by the Kiev’s police station," the statement read.

Russia
Russian Servicemen Kidnapped in Crimea by Ukrainian Operatives
In 2013-2014, Maidan witnessed months of the pro-European protests sparked by then President Viktor Yanukovych's announcement to reject the Ukraine–EU Association Agreement over unfavorable terms.