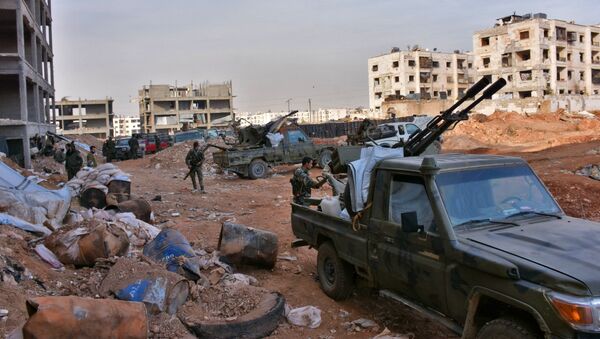 This is a worrying development since chemical weapons could be "very effective and terrifying" when used against people who lack protective equipment, professor Alastair Hay, a toxicologist at the University of Leeds, told Radio Sputnik.

"Yes, it is very effective. It's effective if you're using it against people who have no protective equipment. If you've got protective equipment like suits and gas masks, chemicals weapons are essentially a waste of time," he said. "But if you are using them against people who have no protection (for instance, civilian population), it is very effective and terrifying."

Moderate Groups in Syria Using Chemical Weapons Provided by Foreign States
Professor Hay, a leading expert in the toxic properties of chemical warfare agents, was commenting on recent reports that Daesh produced mustard gas they used in 2015 attacks in Syria and Iraq on their own. He described mustard gas, also known as sulfur mustard, as a "volatile chemical."

Mustard gas was first used during World War I and it has been occasionally deployed in the following decades. Professor Hay mentioned the 1988 Halabja chemical attack which saw the Iraqi army used this compound against the Kurds. Up to 8,000 people were killed in the attack and millions fled across the border, the expert said.

"So the fear factor is huge with chemical weapons and that's exploited," he added. "It is worrying that chemical agents are being used again. It's worrying because 192 countries that have signed [the Chemical Weapons Convention (CWC)] agreed that these would never be used. You don't want to see any undermining of that treaty."

This is Where Syrian Rebels Obtain Chemical Weapons
The CWC, formally known as the Convention on the Prohibition of the Development, Production, Stockpiling and Use of Chemical Weapons and on their Destruction, was signed in 1992 and entered into force in 1997. Although approximately 90 percent of the declared stockpiles of chemical weapons in the world are estimated to have been destroyed, the expert noted that chemical terrorism remains "a huge threat."

Professor Hay further said that Russia has been successful in destroying its chemical weapons.

"Russia and America had huge stockpiles. In signing up to this convention both agreed that they would have these stockpiles destroyed under international supervision. And Russia is ahead of the US in that destruction. Well over 90 percent of its stockpiles have been destroyed," he said.

Key Reason Why Russia's Admiral Kuznetsov Does Not Take Part in Aleppo Operation
The expert also said that any violation of the CWC is alarming.

"We all have great hopes for this treaty. And we also need to make sure that it's held up. So any violations, any use of chemical weapons that might undermine it is of course very worrying. This is why all the countries who support the Organization for the Prohibition of Chemical Weapons (OPCW) and the Chemical Weapons Convention are trying to get to the bottom of it and are trying to ensure that their use has stopped," he observed.