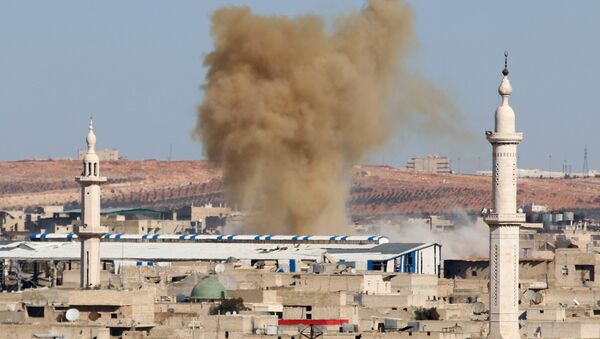 © REUTERS / Abdalrhman Ismail
Subscribe
The UN mission to Aleppo had been evacuated and the situation must be reassessed before the mission can return, Senior Adviser to UN Special Envoy for Syria Jan Egeland told Sputnik.

UN Deems Realistic New Humanitarian Pause in Aleppo Next Week
MOSCOW (Sputnik) — Over the past few months, Aleppo has seen intense fighting, with the government troops along with local militias managing to encircle large groups of militants in the eastern part of the city. The ongoing violence has already affected thousands of civilians still trapped in the city.

"We lack international staff in West Aleppo, they were relocated to Homs and Damascus," Egeland said.

"Soon… We need security assessment first," the official replied, when asked about the deadline for the UN mission's return to Aleppo.

Syria has been engulfed in a violent conflict since 2011, with government forces loyal to President Bashar Assad fighting numerous opposition factions and extremist groups.