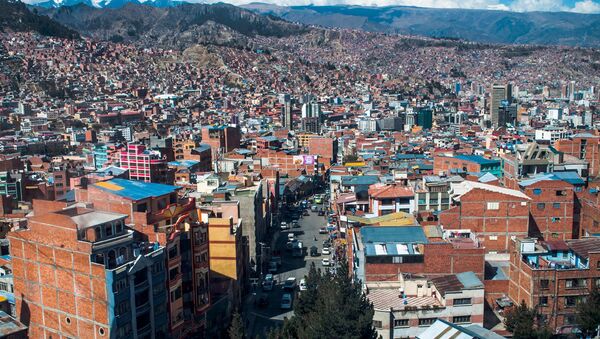 Water rationing has been introduced in La Paz as Bolivia grapples with its worst water crisis in decades. The landlocked country is now suffering water scarcity in five of its nine departments.

La Paz's three main dams are almost dry, with one at 1% capacity and the other two at about 8% each, Al Jazeera reports. La Paz residents have seen their taps go dry for up to 60 hours at a stretch.

One hundred schools have been affected by the rationing, and the Ministry of Education is evaluating contingency measures to draw an early end to the school year, the Pan American Health Organization reported. Seventy percent of the population in the Corque municipality lacks drinking water.

There is no scheduled end to the rationing program in La Paz, which covers some 340,000 people. Rationing has also been introduced in other cities including El Alto, Cochabamba, Potisi and Sucre, Telesur reports.

The department of Social Control of Water and Sanitation (AAPS) declared the water crisis indefinite and that 2017 might bring more of the same.

President Evo Morales has fired the state's top water authorities, head of state water company Epsas and the director of AAPS, for not warning the government about the crisis looming in La Paz, according to Al Jazeera. The president said he has ordered water technicians to find a solution for the suffering city. One plan would bring water from the Kairuni River to La Paz, but it is not clear that would cover more than a quarter of the city’s needs.

Meanwhile, Bolivians are frustrated. There have been protests in La Paz and Cochabamba this week, and community leaders reportedly kidnapped El Alto city water authorities November 17, holding Vice Minister of Water Ruben Mendez, Regional Director of Epsas Roberto Rojas and at least six other officials hostage when Minister of Water and the Environment Alexandra Moreira didn’t show up for a meeting on the crisis, Telesur reports. Police eventually came to ensure the officials were released.

"We need water," La Paz resident Virginia Lopez explained to Reuters. "But the water is dirty, yellow, and now the dirty water is what we have to drink."

Parched residents have been digging makeshift wells to try to cover their water needs. Bolivian health authorities have found that only 6% of these wells meet safe drinking water requirements, according to Telesur.

As rates for basic sanitation services rise, there are fears that the scene is being set for water wars like those that drew tens of thousands to the streets in Cochabamba in early 2000 when the city’s water supply was privatized and rates shot up.

Nacla.org reports that the problem is compounded by antiquated meters that register airflow as well as water flow, as well as the policy of municipal water company Semapa to charge a flat rate for sewage and water services – whether or not those services are received.

The disappearance of Andean glaciers due to climate change is having a huge impact on Bolivia. Without their waters, the country’s second largest lake, Lake Poopo, was declared officially evaporated – gone – in December.

"This is a picture of the future of climate change," Dirk Hoffman, a German glaciologist who studies how rising temperatures from the burning of fossil fuels has accelerated glacial melting in Bolivia, said in a Guardian report at the time. Mining and other water diversion projects are also suspected of having a role in the lake’s disappearance.

Last season's powerful El Nino effect caused flooding and landslides in the first part of this year, but has also raised temperatures, worsening the drought.

Morales is lauded by Water for the People as a champion of water and sanitation access. He has set goals for the country to reach universal access to drinking water by 2020 and to sanitation by 2025.