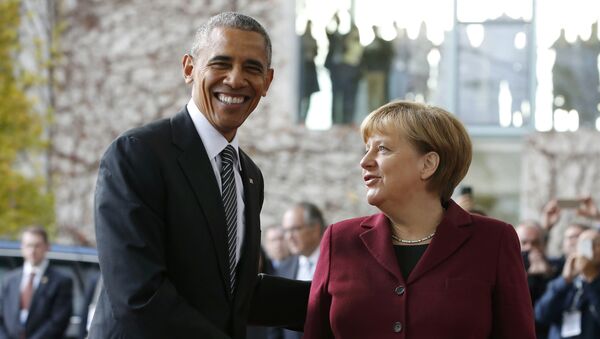 During the talks, the two leaders reaffirmed that Washington and Berlin share a common approach to foreign policy. Obama also called Merkel one of his closest partners as president.

"Obama left his political legacy to Merkel, Europe’s most powerful leader, and called on the German people to support her at the election," an article in the Russian online newspaper Vzglyad read.

Obama's Eurotrip Aimed at Tripping Up Trump Before He Even Steps Into Office
"It is absolutely true that Chancellor Merkel is going to have significant responsibilities," Obama said at a meeting with Merkel.

In response, Merkel thanked Obama for their eight-year partnership, citing a number of achievements Washington and Berlin have made together.

"I'd like to thank him for a good, friendly, and intensive partnership," the chancellor said at a press conference.

Earlier, Merkel expressed willingness to run for re-election. She was first elected as the chancellor in 2005 and reelected twice in 2009 and 2013. She has been at the helm of her Christian Democratic Union (CDU) party for 16 years.

Majority of Germans Want Merkel to Stay for Another Term as Chancellor
"She has great credibility, and she is willing to fight for those values in a way that is very, very important. I'm glad that she's there and I think the German people should appreciate her. Certainly, I've appreciated her as a partner," Obama said during the interview.

During the official talks on Thursday, Obama and Merkel discussed a range of issues, including Russia.

In particular, the American president said: "Russia is an important country. It is a military superpower. It has influence in the region and it has influence around the world."

Obama's Last Minute Anti-Russia Sanctions 'Shame for Democracy'
Obama and Merkel also came to an agreement that anti-Russia sanctions should remain in place. However, both leaders did not mention new sanctions against Moscow over the situation in Syria. Earlier, such measures were announced by sources in the German government.

"This meeting was Obama’s farewell show, and the role of Merkel and other European leaders was to thank the American leader and send a signal to Trump," according to the article in Vzglyad.

Trump’s victory was surprising for Berlin since Angel Merkel placed bets on Democrat candidate Hillary Clinton. However, even Obama’s support did not help Clinton secure a victory.

Trump Presidency Poised to Defuse Risks of World War
"Berlin did not show any interest in Trump. […] In the eyes of the German leadership Trump remained sidelined; however, previously, neither party or nor government [in Germany] has ever allowed themselves to behave in such a way," Willy Wimmer, former Parliamentary State Secretary in the German Defense Ministry, wrote in an op-ed Sputnik Germany.

Obama's visit to Berlin and his meeting with German Chancellor Angela Merkel could be regarded as a signal sent to the EU by the American "war establishment," said.

"It now becomes clear that a sort of bi-partisan 'war establishment' has been formed in Washington, which is now taking every effort to put 'political handcuffs' on the American President [Donald Trump] and make it clear to him that he won't be able to change the 'policy of war' course, which bloomed under Obama," Wimmer said in an interview with Sputnik Germany.