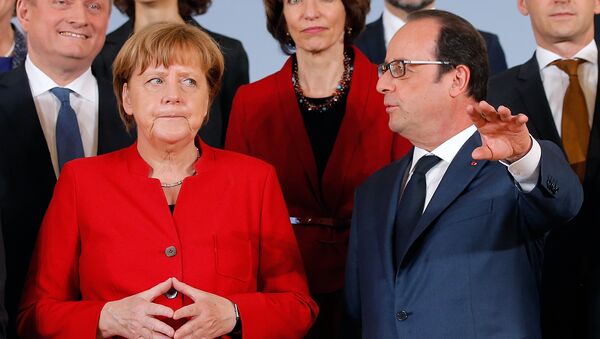 Trouble is brewing for Donald Trump on both sides of the Atlantic Ocean with German Chancellor Angela Merkel taking on the role of the "last resistance fighter against newly elected American President Trump," Willy Wimmer, former Parliamentary State Secretary in the German Defense Ministry, told Sputnik.

US President Barack Obama's recent visit to the German capital has become the focus of worldwide attention; and according to Willy Wimmer, former Parliamentary State Secretary in the German Defense Ministry, there is something cooking in Berlin for newly elected American President Donald Trump.

"It now becomes clear that a sort of bi-partisan 'war establishment' has been formed in Washington, which is now taking every effort to put 'political handcuffs' on the American President [Donald Trump] and make it clear to him that he won't be able to change the 'policy of war' course, which bloomed under Obama," Wimmer told Sputnik Deutschland.

Merkel the Gambler: Berlin Bet Its Shirt on Clinton and Lost
According to the German politician, Obama's visit to Berlin and his meeting with German Chancellor Angela Merkel could be regarded as a signal sent to the EU by the American "war establishment."

Wimmer emphasized that while it would be more logical for Obama to hold his final meeting with European leaders in Brussels, the outgoing American leader chose Berlin.

Having arrived to the German capital on Wednesday Obama spent nearly two days talking with the German Chancellor and journalists. The leaders of the UK, France, Italy and Spain joined the meeting only on Friday, few hours before the US President left Europe.

Wimmer noted that Obama's visit signals Washington's dissatisfaction with what is going on in the European Union.

"This is a signal that you should not underestimate," the German politician stressed, calling to the fact that the US prefers to sow discord between the EU member states rather than to make common cause with Europe.

"I would agree with an American professor who gave an interview to The Süddeutsche Zeitung today. This Professor Davis used to be a member of Hillary Clinton' foreign policy advisory, and he makes it absolutely clear that a lot depends now on Germany's interference in the US affairs. So far, Mrs. Merkel would be given a role of the 'last resistance fighter against newly elected American President Trump'," Wimmer elaborated.

"With outsider Donald Trump's election as US president and the rising strength of far-right and populist movements in Europe, some have suggested that German Chancellor Angela Merkel is left as the last powerful defender of liberal values in the West," Jordans wrote.

The Berlin-based journalist also highlighted that during his final visit to Europe Obama had spent much more time with Merkel than with any of the other European leaders.

"It is absolutely true that Chancellor Merkel is going to have significant responsibilities," Obama said, as cited by the journalist.

Timothy Garton Ash of The Guardian, the UK's left-leaning media outlet, went even further and claimed that "the leader of the free world is now Angela Merkel."

"The phrase 'leader of the free world' is usually applied to the president of the United States, and rarely without irony. I'm tempted to say that the leader of the free world is now Angela Merkel," the political writer said, insisting that Trump's presidency "is likely to be bombastic, erratic and unpredictable." 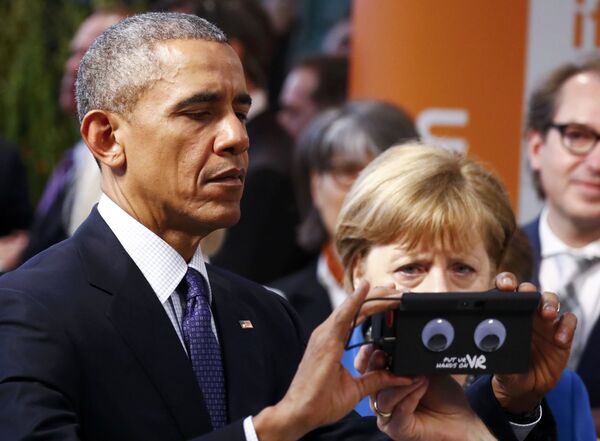 "We are dealing with a sort of international 'collective policy' pursued by Democrats together with the 'war establishment' of Democrats and Republicans in Washington. So, there is a certain role offered to Mrs. Merkel. If one remembers what Merkel said last week regarding the US presidential election, one will see that she is willing to play this role," Wimmer told Sputnik.

Russia Becoming New Center of Gravity for Eastern Europe Against All Odds
The German politician noted that one should not exclude the possibility that a "covert Transatlantic putsch" is being harbored against Trump.

He cited the unusually offensive tone German politicians and mass media sources adopted toward the US President-elect.

Wimmer also referred to the fact that American billionaire George Soros and other liberal donors, that threw their weight behind Democratic presidential candidate Hillary Clinton, held a conference last Sunday on how to "take back power."

"If I were sitting in Washington I would probably think that there is a conspiracy brewing against me," Wimmer remarked.

What is more disturbing is that these developments are "anti-American," the politician stressed, because those behind them completely ignore the right of the American people to choose a president they want.

However, according to Rod Liddle of The Spectator, a British conservative magazine, all efforts to throw a wrench in Trump's work are doomed.

"Neither Brexit nor Donald Trump brought about this paradigm shift. They are simply manifestations of it. The liberal elite… may flail against Trump and Brexit for as long as they like. But to use a phrase which the liberals rather like, and use a lot — they are beginning to look as if they are on the wrong side of history," the British journalist emphasized.