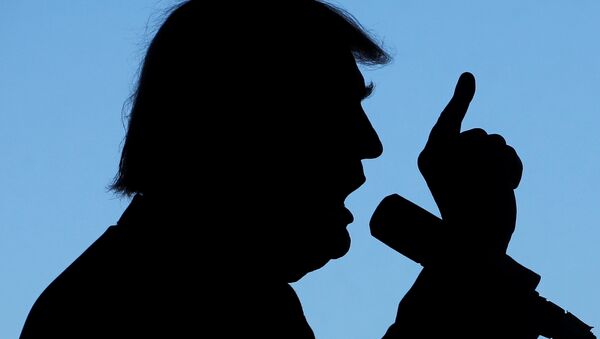 © REUTERS / Jonathan Ernst
Subscribe
The future of the Asia-Pacific region in light of Donald Trump's surprising victory in the 2016 US presidential elections will most likely be high on the agenda of the APEC summit which kicks off in Lima on Saturday.

Strategic Trade Rivalry: Why US-Led TTP Cannot Isolate China
With the Asia-Pacific Economic Cooperation (APEC) Economic Leaders' Meeting opening in the Peruvian capital Lima on Saturday, many predict that the future of the Asia-Pacific region in light of Donald Trump's eyebrow-raising win in the 2016 US presidential elections will top the APEC summit's agenda, according to the Russian news network RBK.

APEC leaders are also expected to discuss the possibility of changing approaches to globalization and trade policy due to the increasing regional and global concerns that in the current state, these approaches are unable to provide social and economic progress for all the participants, RBK reported.

On Thursday, Australian Prime Minister Malcolm Turnbull said that "everyone will undoubtedly be talking about Trump being elected as the US President." He was echoed by Ben Rhodes, Deputy National Security Advisor for the US President, who said that "the [US presidential] elections will be the main topic everywhere, wherever we came."

RBK recalled in this regard that the statements that Trump made during his pre-election campaign prompted concerns of many in the Asia-Pacific region. In April, he said that if Japan and South Korea want to further be protected by the US military, they should start to pay for it.

As for Japan, it is "going to start having" its own nuclear weapons, according to Trump. However, this proposal cannot be implemented due to the Japanese Constitution prohibiting such weapons, RBK said, referring to a CNN report.

During his campaign, Trump made a spate of other controversial statements on the matter, but later backtracked on his words. In any case, his policy related to the Asia-Pacific region has yet to be clarified, according to RBK.

Vasily Kashin, of the Moscow-based Center for Analysis of Strategies and Technologies, believes that "uncertainty after the elections in the United States and the scale of the changes in US trade policy associated with President Donald Trump will be the main topics" at the APEC summit.

"Countries need to find out how far Trump is willing to go to deliver on his election promises," Kashin told RBK.

Vladimir Putin did not take part in the previous APEC summit, RBK recalled, adding that during the Lima gathering, the Russian President will sit down with a whole array of foreign leaders.

Vladimir Putin and Barack Obama are likely to talk informally on the sidelines of the APEC summit sometime this weekend, Kremlin spokesman Dmitry Peskov said on Friday.

Obama arrived in Lima on Friday, and later on Saturday, he is expected to discuss with his partners from the Asia-Pacific region, among other issues, the future of the Trans-Pacific Partnership (TPP), which was supposed to become Obama's legacy-making project.

The future of trade

The TPP trade deal is at risk after Donald Trump's surprising victory in the US presidential elections. Trump vowed to scrap the TPP several times during his campaign calling it a "terrible deal."

RBK quoted Vasily Kashin as saying that the TPP deal is most likely to be terminated and that prospects for the Regional Comprehensive Economic Partnership (RCEP), which was endorsed by Chiba, seem to be more favorable.

At the same time, Kashin warned that it would be wrong to expect rapid progress in the RCEP's development.

Speaking to RBK, former Australian Prime Minister Kevin Rudd, who currently works as an expert at the Valdai Discussion Club, for his part, remained cautiously optimistic about the RCEP's prospects which he said are "now stronger than a month ago."

Asia-Pacific Realpolitik: Beijing to Jump on Trump Bandwagon
In this regard, he pointed to Japanese Prime Minister Abe's readiness "to turn in the RCEP's direction."

Touching upon main challenges to the APEC, Rudd did not rule out that the US will withdraw from all the multilateral trade talks with regional countries and that the US will start to rely on free trade agreements, increasing tariffs for the regional economies and restoring protective barriers.

"It will damage not only the US economy, but also the economy of the region and the whole world," Rudd concluded.