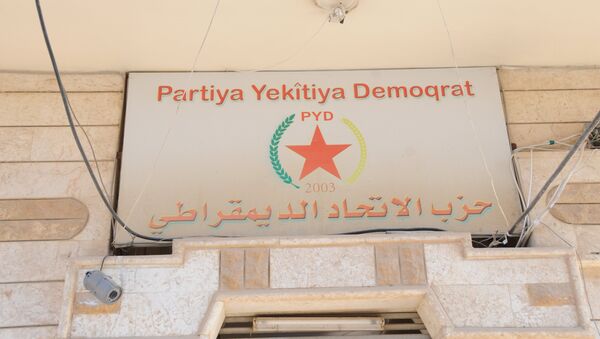 Turkish Prime Minister Binali Yildirim said Ankara was still waiting for Washington to put an end to the presence of Kurdish forces in the Syrian city of Manbij.

MOSCOW (Sputnik) — Turkey is still waiting for the United States to deliver on its promise to put an end to the presence of Kurdish Democratic Union Party (PYD) in the Syrian city of Manbij, Turkish Prime Minister Binali Yildirim said on Friday.

"We agreed with the US from the beginning to end to the presence of PYD in Manbij and that it should withdraw to the east of the Euphrates, and in every meeting they tell us that they are committed to the agreement, and that they will do what is required and we are still waiting for this to happen," Yildirim told reporters, as cited by the Anadolu news agency.

Kurdish PYD Party Calls on Trump to Cooperate in Anti-Terror Fight in Syria
PYD will withdraw from Manbij eventually "one way or the other," Yildirim added.

Ankara considers the PYD and its armed wing, the People's Protection Units (YPG), to be affiliated with the Kurdistan Worker's Party (PKK), which is designated as a terrorist group in Turkey and the United States.

The Syrian Kurds have been fighting against the Daesh militant group for years and has been controlling several areas of Syria, including Manbij.

On August 24, the Turkish army with the support of US-led coalition aircraft launched the Euphrates Shield operation to clear Jarablus and the surrounding area of Daesh, outlawed in Russia and many other countries. The operation has been widely criticized both by the Syrian Kurds and Damascus accusing Ankara of violating Syria's territorial integrity.