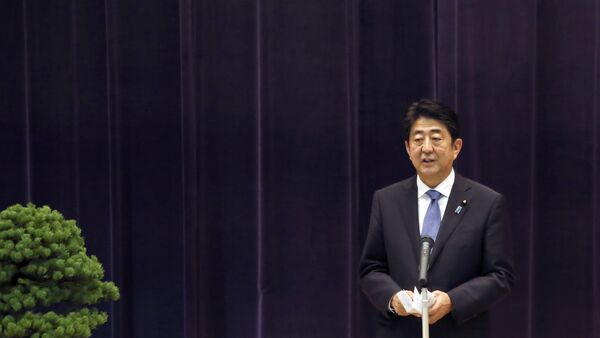 © AP Photo / Koji Sasahara
Subscribe
Japanese Prime Minister Shinzo Abe has arrived in the Peruvian capital of Lima to take part in the Asia-Pacific Economic Cooperation summit over the weekend, a Sputnik correspondent reported on Friday.

Prior to coming to Lima, Abe arrived in New York to meet with Donald Trump, becoming the first foreign leader to meet with the US president-elect.

In the context of the likely collapse of the Trans-Pacific Partnership (TPP) agreement initiated by outgoing US President Barack Obama, as Trump promised to scrap it, Japan may rush to secure a bilateral free trade deal with the United States, member of APEC Business Advisory Council (ABAC) Stephen Jacobi told Sputnik earlier in the week.

Abe refused to reveal the details of the New York meeting, but said he hoped to establish a relationship of trust with the new US leader.

On Saturday, Abe is expected to hold a bilateral meeting with Russian President Vladimir Putin. They may discuss the issue of signing a peace treaty and expansion of cooperation on the disputed Kuril Islands, according to Kremlin aide Yury Ushakov.

On Sunday, Abe will participate in the summit along with 20 other leaders of APEC countries.