'No' to Sanctions! Italian Eurosceptic Party Calls to Fix Relations With Russia 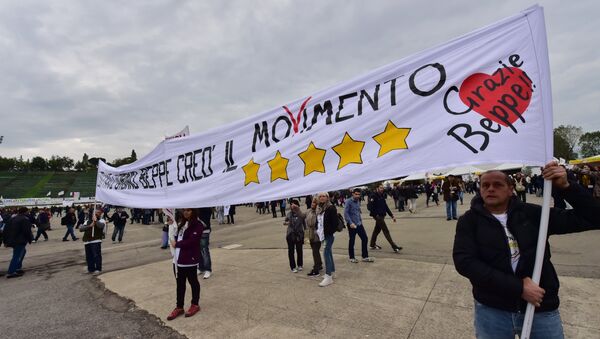 During their visit to Moscow, members of the Italian political party called Five Star Movement called to put an end to the anti-Russian sanctions, and decried the politics of Prime Minister Matteo Renzi along with the upcoming constitutional referendum scheduled to be held in Italy on December 4.

Renzi Vows to Quit if Italians Fail to Back Constitutional Reforms in Referendum
Prior to their meeting with representatives of the Italian community in Moscow, members of the Five Star Movement visiting the Russian capital held a press conference at the multimedia press center of Russia's International Information Agency Rossiya Segodnya.

During the event party members Paola Carinelli, Michele Dell'Orco, Mirella Liuzzi, Giuseppe Brescia and senator Vito Petrocelli answered questions posed by Sputnik Italy readers, clarifying the Five Star Movement’s stance on a variety of issues like the upcoming constitutional referendum in Italy, the relations between Rome and Moscow and the recent deployment of Italian troops to Latvia.

Senator Petrocelli pointed out that his party’s opponents have, depending on the circumstances already tried to portray the Five Star Movement as "pro-fascist, pro-communist or friends of Nigel Farage", so the attempts to label the party as a “hand of Putin” are hardly anything new.

"If Russians are content with having Putin as their president, then we are content with it as well. We do not meddle in other nation’s politics, and firmly believe that no country should interfere in the political affairs of another. All we do is support the economic, political and social interests of our fellow countrymen and companies in Italy and abroad. And if these interests coincide with those of another country, big or small, that’s not important," Petrocelli said.

He added that the Five Star Movement’s goal is to support Italy after being damaged by the actions of several cabinets that "weren’t elected by the people but appointed by the president of the Republic."

Meanwhile, Mirella Luizzi remarked that the deployment of Italian soldiers to Latvia was essentially done to keep Russia ‘in check’ – a move that Italy absolutely does not need.

"This is a move that we don’t agree with because Russia requires a different approach: we need to initiate a dialogue, lift sanctions, return to the relations that we had before," Luizzi said.

She lamented that while their party attempted to discuss this troop deployment in the parliament, their proposal ended up "stuck" in the foreign policy commission.

"This is why we’re against the referendum and reforms that are meant to legalize a practice that existed for quite some time now, when a lot of political decisions, related first and foremost to the foreign policy, are being made not by the parliament, but by the government alone," Luizzi explained.