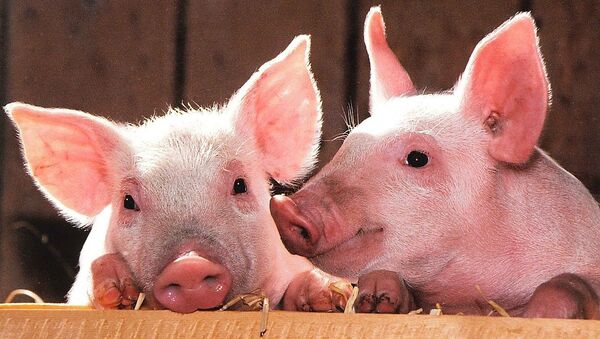 © Photo : Pixabay
Subscribe
Pigs have personalities too - and can be pretty moody sometimes which can even affect the decisions they make, according to a new study carried out on the four-legged creatures in the UK.

"Personality and mood have such a significant effect on an animal's outlook," Lisa Collins, professor of animal science at Lincoln University UK told Sputnik.

Professor Collins and her colleagues who specialize in animal behavior and welfare at the universities of Lincoln and Newcastle, found that, like humans, pigs are more likely to have a pessimistic outlook on life if they're in a bad mood.

"This study is the first to show that personality and mood affect an animal's judgement," Professor Collins told Sputnik.

​For the sake of the study, the pigs' personalities were deemed to be either "proactive" or "reactive."

The pigs were then put into two different pens in environments already known to influence their mood and were trained to associate two different feeding bowls, each with different outcomes.

One bowl had sugar-coated sweets, the other, coffee beans. A third bowl was also put out for the pigs while researchers watched them to see whether the pigs approached it in a good mood hoping for more sweets or not. It was this act that showed the scientists how optimistic or pessimistic each pig was.

"There was also a big effect from personality here too," she said.

"This study is the first to show that personality and mood affect an animal's judgement."

The pigs with a proactive personality were more likely to respond optimistically to the bowls of food, regardless of its environment. However the optimism of pigs who were offered a third bowl, was significantly affected by their mood.

"This has previously only been shown in humans. But we know that many animal species have personalities — from nematodes to sharks. So we may yet find that other animals' minds work in the same way," Professor Collins told Sputnik.

Moodiness and differing personality traits are usually attributed to human characteristics — not pigs — nevertheless this study is the first time the behavior and outlook of an animal is shown to be directly affected by its mood and personality, whether its coffee or sugar-related.

​The findings from the study are published in the Royal Society's scientific journal, Biology Letters.