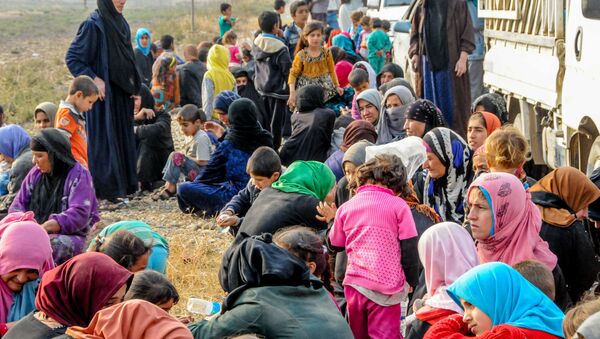 © Sputnik / HİKMET DURGUN
Subscribe
The operation to retake Mosul from Daesh has displaced nearly 60,000 people, according to the International Organization for Migration.

GENEVA (Sputnik) — Over 59,700 people were displaced in the Iraqi city of Mosul amid the operation to liberate it from the Daesh terrorist group, with the number increasing by over 5,400 in the past five days, the International Organization for Migration (IOM) said Friday.

According to the IOM, over 3.1 million Iraqis have been displaced across the country since January 2014 through November 10, 2016.

Second Month of Mosul Battle: No Progress, Information Blackout
Iraqi forces backed by the US-led coalition against Daesh launched the operation to reclaim Mosul from the terror group on October 17.

Humanitarian organizations have warned that the offensive could displace 1.2-1.5 million people in and around Mosul.

Mosul, the second biggest Iraqi city, as well as a number of other northern and western Iraqi cities and towns were seized in 2014 during an offensive of the Daesh terror group, outlawed in Russia.