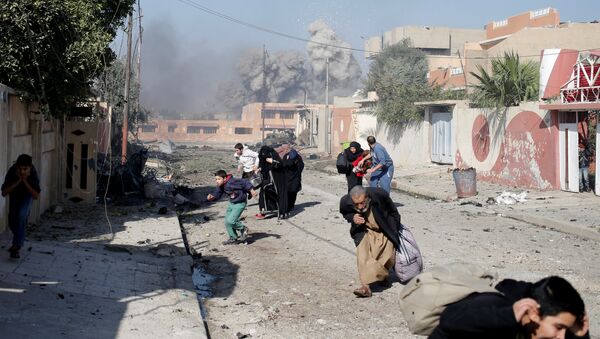 © REUTERS / Goran Tomasevic
Subscribe
Thursday marked one month of intensified military operations to retake Iraq's second largest city of Mosul from Daesh; the much-publicized offensive however has only heightened the humanitarian crisis in the country and seems to be far from over.

First Month of Mosul Operation Heightens Humanitarian Crisis in Iraq
One month since the start of the much-publicized offensive to retake Iraq's second largest city of Mosul from Daesh, the UN Office for the Coordination of Humanitarian Affairs (OCHA) stated that the operation has only increased the already dire humanitarian situation in Iraq.

"Today marks one month of intensified military operations to retake the city of Mosul…These latest developments further exacerbate a humanitarian crisis in a country where 10 million people already were in need of aid," OCHA said in a joint statement with aid agencies on Thursday.

Commenting on the absence of progress in the offensive, Russian military expert Anton Mardasov noted that it is quite hard to analyze what is happening on the ground in the area as practically all information provided to mass media by the Iraqi command turns out to be not consistent with the reality.

"Journalists have been excluded except for a number of crews whose shots have been circulating worldwide even though they have not been given access to the frontline," Mardasov, Head of the Department of Middle Eastern Conflicts of the Moscow-based Institute of Innovative Development told RT. 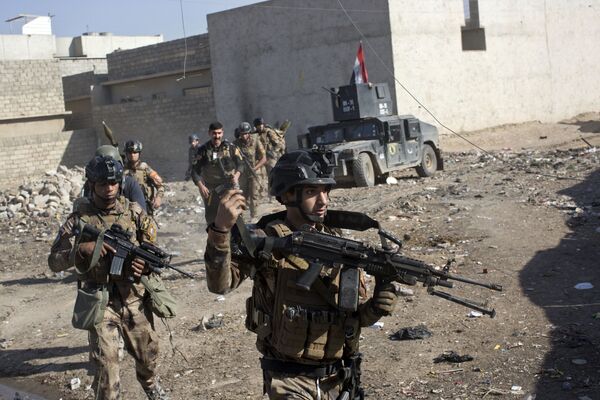 He further noted that two weeks ago the Iraqi government proudly announced that the government forces have retaken six Mosul districts. However soon afterwards they were pushed back by Islamists, he said.

"Such messages have been sent in light of the American presidential campaign in order to play into the hands of the protégé of the current US president," the expert said, adding that moreover, staged footage from the area have become a normal practice.

He cited as an example a recent report from the battlefield near the city of Fallujah, which featured dead bodies and a Shia militia fighter who was throwing a Daesh banner to the ground. However upon zooming in it became clear that it was staged just for the camera using props.

Another military expert, Mikhail Khodarenok provided his reasons for the lack of progress in Iraq.

Sputnik EXCLUSIVE: Secret Document Tells Daesh Not to Attack US Coalition Planes
"Mosul is being stormed by a mixed group: Iraqi government forces, about 29 thousand servicemen, Kurdish Peshmerga, up to 4,000 fighters, Shia and Sunni militia, up to 10 thousand. Besides there are up to 500 American special forces fighters, over 200 Turkish and about 500 Italian servicemen. It is quite hard to organize such a group," he suggested.

He further noted that the US special forces basically indicate targets for the air forces of the US-led coalition. However they often strike on civilians and city infrastructure which has already resulted in over 1,000 civilian casualties.

Meanwhile, Sputnik's Arabic bureau has recently obtained photos of a decree by Daesh (ISIL/ISIS) leaders instructing its fighters not to attack US-led coalition aircraft operating over Mosul and the surrounding area.

The document explicitly told jihadis not to attack any coalition aircraft over Mosul or its suburbs.

Both military experts therefore suggested that the Iraqi operation seems to be far from over.

000000
Popular comments
I don't think it's too hard to organize everyone together. But if it is then why put together a mish mosh group of different fighters with different language barriers from the start ? Seems pretty retarded to me . It's as if they set up this situation not to win at all and just purposely make mass co fusion.