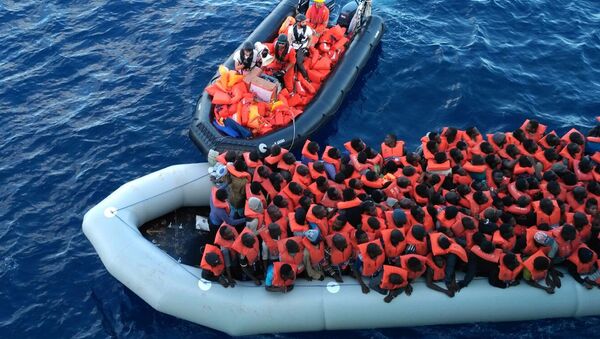 From sub-Saharan Africa across the Mediterranean Sea - hundreds of migrants are still risking their lives as record numbers arrive in Italy.

The majority of the boats carrying migrants still set sail from the Libyan coast as the number of deaths at sea hit a record high in November, according to the International Organization for Migration (IOM). In the week beginning 14 November 2016, around 365 people were reported to have drowned in the Mediterranean Sea in three separate shipwrecks.

"Shared responsibility is what we are trying to do in the global compacts about refugees and #migrants" — @IOMchief at #CRMHonduras2016 pic.twitter.com/eJ0tx68kbM

IOM Sets Up Medical Clinics on Libya's Coast to Treat Migrants Rescued at Sea
​Survivors recently described setting sail from Libya to be then abandoned at sea, robbed of their life-jackets by people smugglers and boat engines removed — leaving them with only hope keeping the boat afloat.

Survivors told Doctors Without Borders (MSF) that they had set off from Tripoli but then the traffickers arrives in a different boat and ordered them to remove their life jackets at gun point before stealing the engine.

Some passengers fell overboard, others died from exhaustion as the rubber dinghy was thrashed by the raging sea. A group of around 27 survivors, "exhausted" and "traumatized," were rescued by a British Navy ship.

​Recent figures from the IOM reveal that more than 4,600 migrants have died in 2016, with 343,589 arriving by sea to Europe, mainly to Italy via Libya across the sea now known as the 'Mediterranean graveyard'.

"It is a real humanitarian catastrophe that it taking place before our very eyes. Europe urgently needs to take responsibility and put in place an adequate response."

The EU-Turkey deal means people are dying out of sight, trapped in war zones and unable to flee for their lives. @DanielW48447457