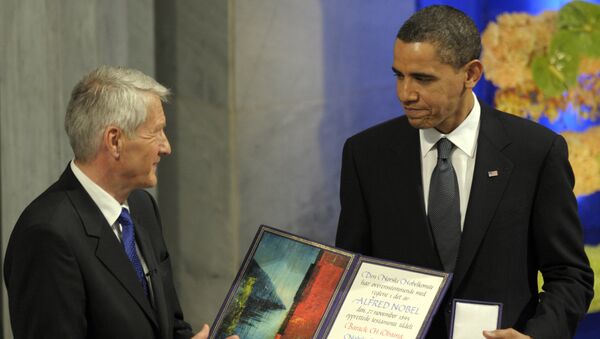 "Obama is the worst [president]. Not only regarding Russia, but also what is going on in Syria, situations in Afghanistan, Iraq. I think he has been the worst president of the Unites States. We can't understand how he was awarded the Nobel Peace Prize, because his policy is opposite," Salvini said, asked about results of Obama’s eight-year presidency.

He added that Donald Trump winning US presidency was a positive outcome for the whole world, particularly for US-EU and US-Russia relations, as the president-elect pledged to undertake many positive changes in the US foreign policy.

Nobel Peace Prize-Winner Obama Dropped 23,144 Bombs in 2015
During Obama’s US presidency, which is set to end on January 20, 2017, the United States established an international coalition launching airstrikes against terrorists in Iraq and Syria, which have not been authorized by the Syrian government or the UN Security Council.

Washington also introduced several rounds of anti-Russia sanctions since the reunification of Crimea with Russia, accusing Moscow of annexing the region and meddling in the Ukrainian conflict.