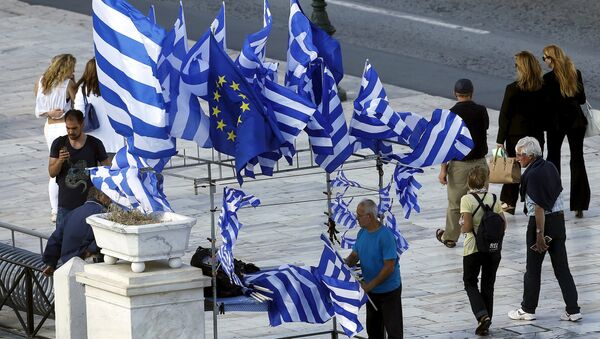 Only 31 percent of Greeks are positive about the country’s membership in the European Union, while the average support for the European Union in the bloc amounts to 53 percent, according to the Eurobarometer poll.

EU Commissioner Calls for 'Comprehensive Agreement' on Greece Financial Support
MOSCOW (Sputnik) – A total of 31 percent of Greeks are positive about the country’s membership in the European Union, which is the lowest support for the bloc among the member states, the Eurobarometer poll showed.

The average support for the European Union in the bloc amounts to 53 percent. Most people believe that the EU membership is profitable for their countries and there are more issues uniting the EU countries than problems that can lead to the bloc’s dissolution.

The highest support for the bloc was registered in Luxembourg, Ireland, the Netherlands and Germany with more than 70 percent of people positively assessing EU membership.

Greece Expects to Receive $3.14-Bln Tranche From EU on October 10 – Source
At the same time, in no EU country more than 50 percent of respondents said that the European Union was moving in a right direction. The highest support for the EU policy was registered in Ireland (50 percent) and in Belgium (46 percent). People in Greece, France and Great Britain turned out to be most dissatisfied with the EU policy with less than 20 percent of respondents welcoming the bloc’s political course.

The poll was conducted between September 24 and October 3 with 27,700 people aged 15 and more having taken part in it.