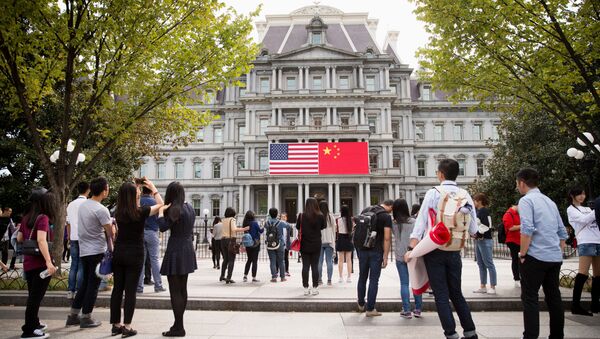 The election of Donald Trump has encouraged the US Congress to consider blocking Chinese investment in US companies, expert in Far Eastern affairs Alexander Larin told Sputnik.

Chinese Splash the Cash on US Real Estate But Congress Recommends Investment Ban
On Wednesday, the US-China Economic and Security Review Commission produced its annual report to Congress, in which it recommended that US lawmakers ban Chinese state-owned enterprises from buying stakes in US companies.

The commission referred to recent Chinese attempts to buy US companies such as chipmakers Fairchild Semiconductor and Micron Technology, which have led to "growing political concerns" for US national security.

"There is an inherently high risk that whenever [a state-owned enterprise] acquires or gains effective control of a US company, it will use the technology, intelligence and market power it gains in the service of the Chinese state to the detriment of US national security," the commission reported.

The report was received badly in China, where Chinese officials have already complained about blocks to their investment in the US.

Alexander Larin of the Russian Academy of Sciences' (RAN) Institute of the Far East told Sputnik that relations between China and the US could become particularly strained if Congress follows the recommendation, particularly given that new US President Donald Trump has spoken out against Chinese economic policy and threatened to impose higher tariffs on Chinese goods.

"Following the election of the new US President, some forces have stirred which want to review economic relations with China," Larin said.

"Bringing this kind of recommendation to Congress demonstrates that Trump has a certain level of support in the business community, and that his eccentric statements during the election campaign had some basis, that he has some support."

Between January 2005 and June 2016 the US received over $125 billion in large Chinese investments, excluding bonds.

'Obama Lost His Pivot in Asia and Keeps Losing Ground in Syria'
Larin said that China is sure to be worried by the US threat to ban investment from its state-owned corporations. He said that Beijing is keen to develop a relationship of equals with the US, a vision which is threatened by the new proposal.

"Of course this is alarming for Beijing, they have already talked about the need for efforts to further the positive and constructive development of Chinese-US relations."

"A good basis for this could be Chinese ideas to develop a new kind of relations between China and the US, as major powers. The development of events shows that the alarm in Beijing about future relations was justified. It is absolutely possible that we will see a worsening of Chinese-American economic relations. I expect some serious and important events, although it is impossible to predict how far the US will go in straining trade relations with China," Larin said.

The decision to prevent Chinese state-owned corporations from investing in US companies may also impact China's ability to invest in Europe, too.

During a meeting at the US embassy in Berlin, US intelligence presented German government representatives with evidence that Aixtron manufacturing technology also has military applications, and convinced the Germans to stop the deal.