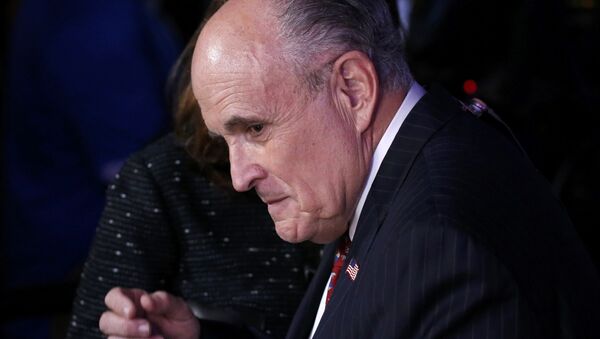 © REUTERS / Jonathan Ernst
Subscribe
In an interview earlier this week, Syrian President Bashar Assad said that he would welcome President-elect Donald Trump as a 'natural ally' in the fight against terrorism. Asked to comment on Assad's remarks, 21stCenturyWire.com founder Patrick Henningsen stressed that his hopes can be met, if Trump continues to maintain his independent streak.

Assad: Trump May Be 'Natural Ally' for Syria in Fight Against Terrorism
In his interview for Portuguese television broadcaster RTP, Assad said that while "we cannot tell anything about what he [Trump] is going to do, but if, let's say if he is going to fight the terrorists, of course we are going to be an ally, a natural ally in that regard, [together] with the Russians, the Iranians, with many other countries who want to defeat the terrorists."

Speaking to Radio Sputnik, Henningsen explained that what Assad was talking about "is a potential realignment in foreign policy – a clean break from what has been the US policy for the last eight years, and even going back further than that, which is Washington's disregard for respecting the national sovereignty of countries – their aiming to overthrow governments through regime change and other deep state subterfuge activities led by the CIA and using partners like George Soros on the ground, and softening up countries to the point where destabilization could lead to regime change."

"This has been the Obama doctrine, unofficially anyway," the journalist explained, adding that "this is what we've seen in Ukraine and Syria. And you could argue that a few Arab Spring countries would fall into that category as well."

"So Bashar Assad is talking about the potential that this presidency might be looking at Syria as a nation state with some sort of respect, rather than looking at it as something to topple, and disintegrate, a la Libya, for instance." This, Henningsen stressed, would be a "complete overhaul in the philosophy of [US] foreign policy."

No Walkover for Trump: Despite Rep. Congress Majority 'Not All are Trumpists'
As far as Assad's suggestions that Russia, Iran, the US and other countries could join forces to face down the common threat of Islamist terrorism, the journalist said that it would be "a little more problematic," even if it would be "ideal."

"Donald Trump has made a number of statements on the campaign trail that equate with common sense, but as we assemble a cabinet in Washington, you have some characters on the periphery that the establishment would like to insert or embed. [Trump's win is seen as] an opportunity for some neo-conservative elements to get reenergized and get back in the game."

"Namely, we're looking at characters like John Bolton and Rudy Giuliani; these would be the war hawks, people who have called for the bombing of Iran – people who say that Iran is the world's number one state sponsor of terror – making statements like this that really come off a memo that's probably handed to them by the Israeli lobby."

Trump Must Avoid Picking Neocon John Bolton as US Secretary of State - Rand Paul
"These sort of characters are involved financially in some ways and also politically very much aligned with Israel," Henningsen stressed, "so anything anti-Iran is going to feature in their rhetoric and belief system."

"That's a problem, because of Iran and their support of Syria, and the relationship with Russia and other countries, like China. This is going to be a constant source of problems, of conflicts of interests within the Trump cabinet."

Accordingly the journalist suggested that only time will tell how everything plays out.  "If there is a complete realignment of US foreign policy, then they will be looking at Iran differently, but this rhetoric against Iran has been so deep and pervasive over the last many years in the US that it would be very hard for some politicians to walk back some of the outrageous statements [they have made]."

Asked whether President-elect Trump will be able to overcome these hurdles after stepping into office, Henningsen emphasized that thing the businessman has going for him is his independent streak.

Ex-New York Mayor Giuliani: 'I Won't Be US Attorney General'
"In Donald Trump you see an independent person in terms of a chief executive compared to the last two presidents, who came in with very little experience. George W. Bush had very little experience as a statesman, much less traveling outside the United States before he became president. Barrack Obama came in with less than one term as a US senator, completely wet behind the ears…Both of those presidents with little experience were basically surrounded by hand-picked people around them. They had no power base."

"So we'll have to see," Henningsen stressed. "It's going to be very difficult for him to maintain that air of common sense foreign policy with so many vipers in the nest. There are a lot of interests and a lot of big money in Washington that have a vested interest in seeing perpetual conflicts."