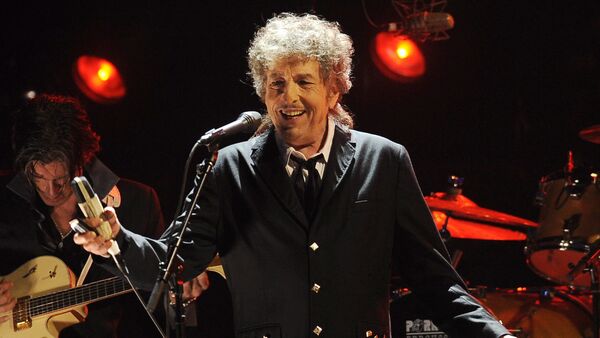 For the past few weeks Sweden's attention has been riveted on Bob Dylan's somewhat cool reaction to being awarded the Nobel Prize. Contrary to Swedes' expectations, American troubadour made it clear after long deliberations that he won't attend Nobel Gala in Stockholm in person.

Like a Rolling Stone: Swedish Academy Quits Attempting to Reach Bob Dylan
The Swedish Academy, which hands out the Nobel Prize in Literature, reported on November 16 having received a letter of refusal from Dylan himself. In the letter, 75-year-old bard explained that he would be unable to attend the Nobel Prize Gala in Stockholm in December, blaming schedule conflicts and pre-existing commitments, the Swedish tabloid newspaper Aftonbladet reported.

"He underscored, once again, that he indeed feels much honored and wished that he could receive the prize in person," the Swedish Academy reported. "The prize still belongs to Bob Dylan," the academy noted, adding that the only requirement is that he give the traditional Nobel Lecture within six months from December 10. The lecture does not have to take place in Sweden.

Swedish Academy member Horace Engdahl explained that there is nothing unusual for the prize winner not to show up.

"It happens from time to time that laureates for various reasons cannot show up in Stockholm and participate in the ceremony. It has been like this throughout the history the Nobel Prize. This is nothing dramatic," Horace Engdahl said.

Company You Keep? Swanky Swedish Hotel Disowns 'Alternative Nobel' Gala
Whereas decisions not to receive the prize in person are "unusual, but not exceptional," the list of Sweden-shy prize winners includes Doris Lessing, Harold Pinter and Elfriede Jelinek.

Soviet writer Aleksandr Solzhenitsyn, who was awarded the 1970 Nobel Prize in Literature, refused to attend the Nobel Gala and refused the award altogether, yet reconsidered and accepted the award in 1974 after leaving the Soviet Union.

​In 1958, dissident Soviet poet Boris Pasternak refused the prize he was awarded for his novel "Doctor Zhivago" after the wave of criticism it had stirred in his home country. The Nobel medal was first awarded to Pasternak's son in 1989.

​French philosopher and existentialist writer Jean-Paul Sartre remains so far the most renowned "conscientious objector" in the Nobel history. In 1964, Sartre declined the Nobel Prize, stating that a writer must refuse "being transformed into an institution, even if it happens in the most honorable form" and remained loyal to his beliefs.

In October, the unconventional choice of singer-songwriter Bob Dylan as the Nobel Prize laureate, stirred a debate across the globe. Dylan himself added fuel to the fire by ignoring repeated phone calls by the Swedish Academy, whereupon he was called "impolite" and "arrogant" by academy members. Dylan accepted the prize only with a fortnight's delay.