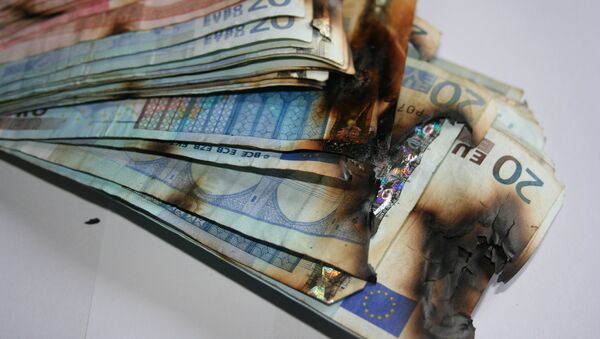 The past few years have seen the growing popularity of social currency in Spain, where ordinary people are ditching the euro and exchanging services and products using an alternative currency.

The first currency of this kind, the zoquito, appeared in the city of Jerez de la Frontera in 2007. Its success inspired residents of other cities to establish their own social currencies, such as the puma, the chavico and the parlones.

The zoquito is a "complementary currency in relation to the euro and is used as a non-profit exchange tool by a certain circle of people living in the province of Cadiz," according to the currency's official website.

The users of this currency claim that it "enriches the participants because they do not leave the autonomous community". In addition, the zoquito "supports local companies and promotes their development."

As for the puma, it is a "social exchange network" which has been used in the historic center of Seville since 2012. According to its creators, this alternative currency is used for "any exchange of goods and services in accordance with the ethical principles of social currency."

Aside from promoting local trade and improving relations between locals, social currency is also used for financing public projects, such as repairing historical buildings.

Granada operates the chaviko currency. Like in other Spanish cities, the chavico stimulates the exchange of goods and services within the autonomous community, also contributing to the local economy and the accumulation of capital.

"The chavico is a production, distribution and consumption network based on ethics, democracy, ecology and solidarity on the territory of Granada and its province," according to the currency's website.

Mamma Mia: Italian Banks on Verge of Collapsing Entire Eurozone Financial System
In the city of Girona in Catalonia, one can find an economic system called the RES, which brings together small- and medium-sized businesses, as well as entrepreneurs in order to support the local economy.

The RES is "increasing the sales of participating enterprises by at least three percent."

This currency is based on a similar system in Belgium and is one of the fastest growing alternative currencies in Spain.

In 2017, one of Spain's most ambitious local currency systems was launched in the town of Santa Coloma de Gramenet. Although the currency does not yet have an official name, it is already known locally as the parlones.

The creation of this new currency system is subsidized by the EU. The Parlones is expected to boost the local economy and increase public spending in the city.

Meanwhile, the Spanish capital Madrid is also preparing for an alternative currency called the jarama which will be operational as of the first half of 2017.

Italy's Ailing Financial System and Weak Banks 'Risk Destroying Eurozone'
"The goal, as in all other cases, is to promote local trade," Jose Mayora, one of the project's founders, was quoted by the El Pais newspaper as saying.

"The novelty, in particular, lies in the fact that the enterprises dealing with social facilities, such as fitting rooms adapted for disabled people, will have an advantage in terms of exchanging the euro for the harama. It is a sort of discount," Mayora added.

Local alternative currencies can become an effective tool to develop trade in the region, add to the creation of small and medium-sized enterprises and strengthen the friendship and the support among people in specific regions, according to Sputnik Spain.