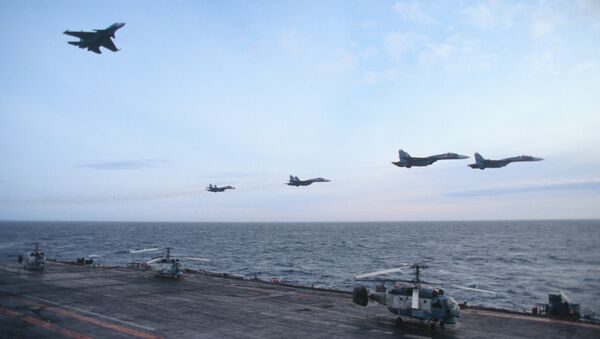 Russian Ministry of Defense released a statement Thursday informing that Russian Aerospace Forces carried out a strike on Daesh and al-Nusra targets in Syria on November 17.

"All of the targets' coordinates were verified and confirmed by reliable intelligence data," the statement said. "The results of the air and missile strikes were overseen by unmanned aerial vehicles."

Russia's Admiral Kuznetsov Aircraft Carrier Begins Combat Operations in Syria
The missile carriers' route lied above the water areas of the north seas and Eastern Atlantic, the statement said. Once the strike on Daesh and al-Nusra targets was carried out, Russian Aerospace Forces' aircraft returned to the airport of location.

According to the ministry's statement, a group of Russian strategic bombers launched cruise missiles from an area over the Mediterranean sea after flying some 11,000 kilometers (some 6,835 miles) from Russian airbases.

Su-33 fighter jets based on Admiral Kuznetsov air carrier and aircraft from the Russian air group at the Hmeimim airbase also took part in the strikes.

Russian Admiral Grigorovich Frigate Targets Terrorists in Syria With Missiles
On November 12, the commander of the Admiral Kuznetsov said that sea-based jets of the aircraft-carrying cruiser Admiral Kuznetsov which arrived in the Syrian coast heading a group of the Russian Northern Fleet's squadron started training flights.

Russia introduced an earlier humanitarian pause in October, to ensure the safe evacuation of civilians and unarmed militants from eastern Aleppo through designated corridors. That pause collapsed when Jabhat Fatah al-Sham (also known as Nusra Front, or Jabhat al-Nusra) militants prevented civilians from fleeing Aleppo and attacked them, prompting an offensive by government forces.